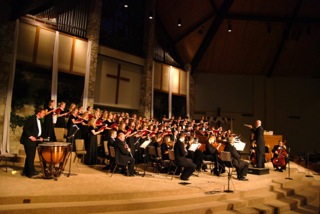 Local parades and backyard barbeques are the hallmark of Memorial Day celebrations, but for two SNU alums, the grill will have to wait. Darren Currin (Class of 95) and Matthew Thompson (91-93) will spend their Memorial Day Weekend in a whirlwind of costumes, props, lights and logistics as they team up to produce their third short film as part of the Project 168 Film Festival.

Held each year in Los Angeles, the festival is the showcase for an annual faith-based speed filmmaking competition that draws entries from around the world.  For the competition, producers are randomly assigned a Bible verse and must write a script based upon it.  Teams are then given 168 hours (7 days) to fully produce and submit their completed films.

Thompson, who serves as Director of Media Ministries at First Church of the Nazarene in Killeen, Texas, heard about the festival while attending a luncheon hosted by festival founder John Ware.  After bringing the vision for the project back to his church, they agreed to take a leap of faith and put a team together.

Once the project was official, Thompson knew immediately that he wanted Currin as a writer.  The two met at SNU in 1991 while both living in Snowbarger Hall and have remained friends since.  Currin signed onto the project and the pair wrote the script for the short film Unraveled along with a third writer, Steve Walsh.

In 2013, the two co-wrote the screenplay for the church’s second short film, Old Family Recipe.  Plagued with equipment failures, unrelenting thunderstorms, a noisy marina and a hay field infested with chiggers, the crew struggled with every shot but ultimately managed to get the film completed and submitted on time.

For this year’s festival the duo is looking to take their experiences from the past two years, both good and bad, and learn from them to make a better film.  Yet, they know that the task will not be an easy one.

“Competition at the festival is fierce,” said Thompson who served as Producer/Director for both of the prior films.   “Last year we competed against a hundred and fifty other teams.  We know going into this that there will be other teams that have more experience and deeper pockets, but at the end of the day, it all comes down to story.  If we can nail the story, and then use the resources we have make it look professional, I think anything is possible.”

As nice as winning a festival might be, the two say that they see the true purpose of their work as spreading the gospel to those who may not be reachable via traditional methods.

“Darren and I have talked at length about the Christian films that are out there and some of the problems we see with them; specifically, the tendency to have one character preaching a sermon to another or to lead the audience through the sinners prayer,” Thompson said.  “Our goal is not to tell a ‘Christian’ story, but to tell one that makes people ask the question ‘What if?’.

One thing the pair is doing differently this year is changing locations. After shooting the past two films in and around Killeen, production of this year’s film is moving to Oklahoma City. The move will open new locations and talent as well as help solve a financial need. The church struggled with this year’s budget, across the board cuts had to made, shrinking the production budget to just $1200. To help offset production costs, Thompson and crew members from Killen First will join with some of the creative media team from LifeChurch.tv, where Currin serves as the LifeGroups and adult ministries content developer.

“I’m excited to put into action so much of what I’ve learned the past three years in my current role and apply it to creating a short film that will communicate the Word of God in relevant and unique way,” said Currin.

By combining crew and gear from the two churches, and using some of the facilities already in place at the Edmond, Oklahoma-based church, the pair will be able to remain under budget without sacrificing production quality.

For this year’s film Currin will serve as Executive Producer and Writer, while Thompson will serve as Producer/Director. Filming begins on Friday, May 23 and the shoot will last for 2 days.   Crew submissions are being accepted now, while casting will take place approx. one week before shoot.  Those wishing to learn more about the project or who would like to volunteer as a cast or crew member can visit the film’s website at http://film.kfcnaz.org.