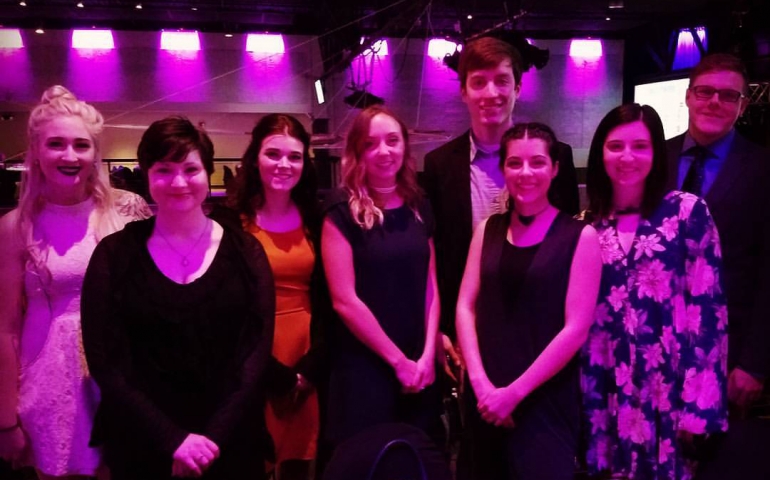 This year’s ADDY Awards presented many awards to SNU students from our graphic design department.

The ADDY Awards were on February 18, 2017 at the Chevy Bricktown Event Center. It’s a fancy night of awards given to some very artsy people (picture an Oscars style party, but for advertising). “It’s the fanciest event I’ve ever been to. There were ladies dressed in big Cinderella dresses!” said Becca Cox, a junior, Bronze Award Winner, and scholarship recipient.

It is a chance for our SNU students to see other people in their future industry’s work and to showcase their own talents to potential employers. This event is actually less for students and more for businesses. In other words, being able to win an ADDY award at the student level deserves recognition.

Of those who are within the graphic design department, there were five award recipients. If you don’t know how an award is won, you’re not alone. As always, that is why I am here to explain the unexplained.

There isn’t a limit to how many awards can be given out in a specific category. There could be 12 million gold awards given in a category; that’s illogical and will never happen, but you get my, albeit exaggerated, point. However, what does happen often is that there is no gold, silver or bronze awarded in a category. If the work is not up to par, then it won’t get an award. If the work is amazing, then it will be given the award it deserves. All this being said, the award process shows that our students who won submitted quality work all around.

Also, there were four scholarships awarded that night, and two of these were awarded to SNU students J.D. Frees and Becca Cox. In order to get the scholarship, these two had to submit their work and be interviewed. The Best of University Award was given to Morgan (Mosshart) Campbell. This award means she had the highest ranking medals out of everyone who entered from SNU.

Winning an ADDY Award is a ‘gold’en opportunity for these students trying to get graphic design jobs after graduation, because it is a stellar thing to put on a resume. Also, they are able to network with the businesses represented at the ADDYs. What are we doing in college if not preparing to make money doing what we love? That’s exactly what these awards recipients had the opportunity to do. They were able to brown-nose to their hearts’ desire.

The humble Morgan (Mosshart) Campbell—senior, Gold and Silver Award Winner and Best of University Award winner—said her favorite part of the night was “seeing the artwork from other colleges and seeing my friends recognized for all their hard work.”