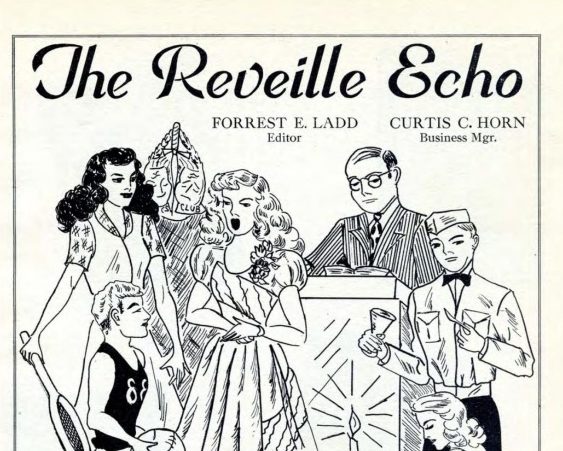 In 1928, Southern Nazarene University (SNU) began their first newspaper publication: the Reveille Echo. Since then, the Echo has changed names, changed formats and had many different editors. While the Echo has transformed in a multitude of ways, the Echo’s purpose and story remain the same: we are the voice of the students.

In an attempt to grasp the story of the Echo, one must look back not only on where the Echo has been but also where SNU has been. SNU has changed presidents, changed buildings and changed the culture of the campus in the last 90 years of the Echo, embodying the growth of our campus, the Church of the Nazarene and the world around us.

Former Editor in the 1946-47 academic year at SNU, Dr. Forrest Ladd played a large role in the growth of the Echo. He discussed the changes that occurred with the Echo, talking about creating “a new office space for the Echo, with a photography lab” and pushing photographs in the Echo to have more of a newspaper-type style. In retrospect, this push was crucial for the Echo– it allowed the public to expand forms from simply writing to photography as well and influenced the medium of the Echo.

Dr. Ladd also discussed how global historical issues influenced his time at the Echo, talking about the challenges of making the Echo a newspaper rather than “a glossy-type magazine periodical.” One major challenge that came with this issue was paper shortages due to the Korean War, Dr. Ladd commenting, “The Korean War was in full swing and paper was difficult to get. President Finch… used his influence to enable us to get enough paper to keep our publication schedule.”

The Echo is a place where Dr. Ladd found a large amount of personal growth, saying, “It helped my interpersonal skills by working with reporters, advertisers and the college administration. It also provided a big boost to my self-confidence: ‘I can do this!’” Interpersonal skills and self-confidence are crucial to both personal relationships as well as relationships within one’s career. The Echo forces one to develop these skills, and through these skills, it shapes how we relate and empathize to one another.

Bruce Nuffer, the editor in the 1989-90 academic year, also experienced a large amount of change to the Echo. At this point in time, the Echo was still being printed manually, digital printing being rather young. Nuffer commented on this, saying:

“The Echo had been saving money to upgrade its equipment, and I begged Jim Wilcox, our advisor, to let me use the money to set up a digital shop. He could not be convinced that doing things digitally could be easier than simply using a Xacto knife to cut out text. Of course, digital design was in its infancy then, and while this sounds quaint now, it was a pretty big mental leap in those days. It was not until the following year that the Echo and Arrow editors teamed up on Jim to finally convince him to let them take the paper digital.”

Nuffer’s push to go digital, while it may have been futile at the time, is what allowed the Echo to be produced easier, faster and cheaper. Like Dr. Ladd, he also experienced some controversy, this time within SNU politics. His year as Editor was the year that SNU went without a President and this year was full of controversy over that choice. According to Nuffer, “The students were overwhelmingly in favor of Loren Gresham as the next president, and throughout the entire school year, the Board of Trustees avoided that possibility.”

The campus was split: the students wanted Loren Gresham, and by seemingly avoiding that possibility, the Board of Trustees droned out the voice of the students. This is the core of the Echo’s job: to sit in the middle of this tension, sometimes uncomfortably, in order to allow the voice of the students to be heard. Throughout this year, Nuffer covered many stories about this controversy, and in the spring of 1990, Dr. Loren Gresham became the newest President of SNU.

The Echo is more than simply a newspaper: it’s a means of telling the stories of the students. Former Editor Grace Williams, who graduated in the class of 2015, commented on the difficulty of this, saying, “Sometimes, the story is hard to tell because culture and the world are changing, and that is sometimes in conflict with the traditions of our university. Other times, the story the Echo tells is a powerful way for students to get to know each other, spark discussion and express themselves.”

As SNU has grown and changed, so has the Echo. Yet, while each Editor has a different story to tell, they are all a part of the same story of the Echo. This story is one of division, disagreements, challenges, and strife as well as one of perseverance, joy, power, and hope– the Echo is necessary to tell the entire story of SNU and has done so through the years.