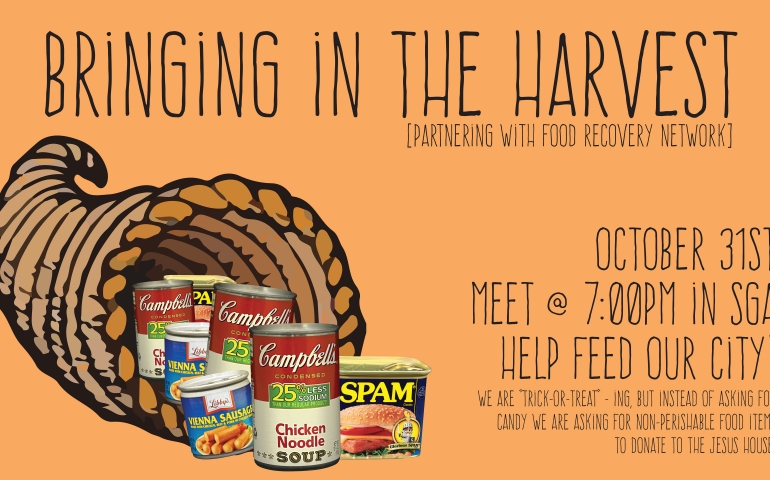 This Halloween, from 7 p.m. to 9 p.m., you can help feed the city by “Bringing In the Harvest”. The Student Government Association (SGA) and the SNU chapter of the Food Recovery Network will be sponsoring a trick-or-treating activity where the goal will be to collect non-perishable food items for the Jesus House.

This community outreach event is new to the SNU campus this year. “We were thinking about doing a fall festival, but then we thought that it would be more fun to give instead of just planning for ourselves,” said Jaci Wise, Sophomore Class President.

Those wanting to volunteer should meet at 7 p.m. in the SGA office, located on the bottom floor of Webster Commons. From there students will pair up and follow a preplanned route located in the Bethany area.

Costumes are not needed and volunteers are encouraged to wear clothing with the SNU logo. In addition to asking for non-perishable food items, volunteers will be handing out flyers that will explain how the food will be used, as well as providing information on volunteer opportunities that are available throughout the year.

Speaking about the hunger problem in Oklahoma, Mandie Oliver, Student Body President, said, “I found out that 1 in 6 kids in Oklahoma City goes to bed hungry every night, and that was kind of staggering to me.” According to the Food Research and Action Center (FRAC), in 2014 Oklahoma City had the 18th highest food hardship rate in the United States, when looking at U.S. Census-defined metropolitan statistical areas.

In fact, Oklahoma is consistently one of the highest ranked states in the number of residents who go hungry and whose households are food insecure. Food insecurity, a fairly new term in the hunger discussion, is defined by the United States Department of Agriculture as meaning “consistent access to adequate food is limited by a lack of money and other resources at times during the year”.

Oklahoma hunger issues don’t stop with the young. According to the American Association of Retired Persons (AARP), 1 senior citizen in 16 struggles with obtaining adequate food .

Oliver hopes that students will take away from this event that there is more to missions than just going to different countries; missions is also “going out into our city and helping our community as much as we can.”

For more information on “Bringing In the Harvest”, you can visit SGA’s website at snusga.com. In addition, you can also contact Mandie Oliver at aoliver@mail.snu.edu or Jaci Wise at jwise@mail.snu.edu.