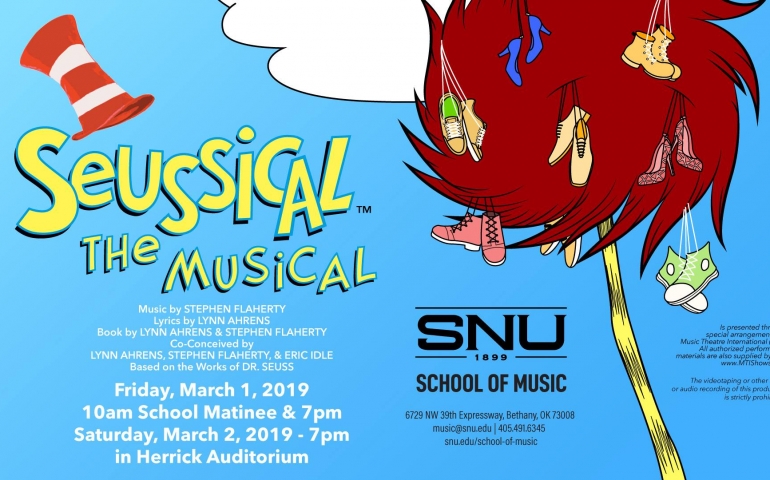 This weekend, Southern Nazarene University’s school of music will open its show, “Seussical the Musical” as a celebration of music, art, community and family. Over the past 3 months, people from all over SNU’s campus, as well as the community surrounding the school, have come together to prepare a show that showcases the talent and dedication of the SNU School of Music.

The show will kick off on Friday morning with a sold-out show aimed at younger students from the community and will continue Friday and Saturday night at 7 pm. The prices per ticket vary– for SNU students with a crimson card, the show is free, but without a Crimson Card, the price of the show is $4. The price is $5 for non-SNU students, $10 for SNU faculty and senior adults, and $15 for adults.

Seussical the Musical is inspired by the whimsical writings of Dr. Seuss, drawing from many of his writings to create a rich yet comical plot. The show actually falls on the weekend of Dr. Seuss’ birthday, and the Saturday show will take place on what is known as “Dr. Seuss Day.” This will give families and students the opportunity to celebrate the beloved writer in a unique way.

The show was a monumental team effort that has been in the works for months. The team that brought the show together is made up of roughly 100 people and includes a cast of over 70 actors and singers, including an orchestra. This show will showcase the talent of many SNU students and will provide a great amount of publicity for the School of Music.

This publicity comes in many forms, but one of the most inspiring ways that this musical is reaching the community is through the younger actors and actresses that get a chance to see what college is like. According to the show’s technical director, Caleb Rose, the musicals even acts as a way to recruit college students to the music program at SNU.

The heart of this show is to bring people together with not only laughter but also with a heartfelt storyline. The musical’s director, professor Jeff Ambrosini, said, “Dr. Seuss’ stories have always been popular with young people and also with the community of education, as far as inclusivity in the community and teaching young people about the issues that come up in their lives, teaching how to deal with them on a personal level.”

This show offers a fun escape from reality, with its bright colors and over the top musical numbers, but it also gives people a chance to step back and examine their own lives through a complex allegory of acceptance and love.

The way that this show has come together mirrors that allegory, and for the technical director and SNU student, Rose said the moment it comes together will be the most rewarding. Rose said that to him, the most meaningful part of this process is “knowing that I had a hand in bringing this together, that I got to help enhance what the actors are already doing”

This weekend’s show will undoubtedly be a triumph for SNU’s School of Music as well as for all those involved, and the story that the musical conveys will likely be as impactful for the audience as the process of creating this show has been for the cast and crew.