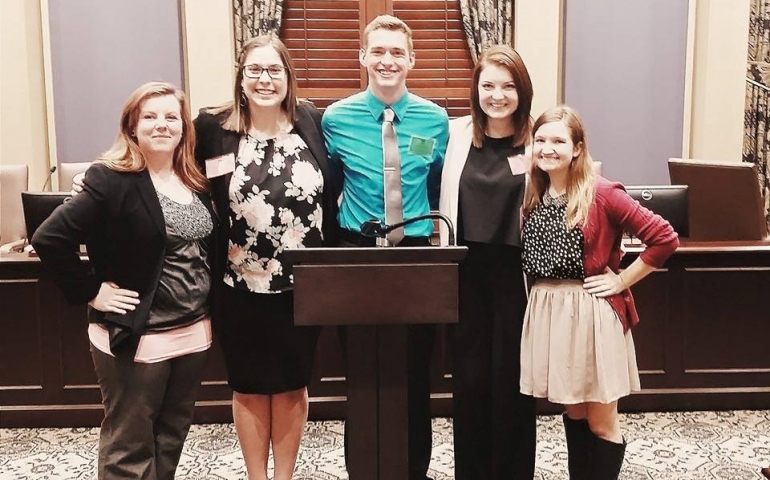 The SNU delegation for this semester consisted of Hannah East, O.I.L. Chair, Rachel Schuster and Alex Harms in the Senate, Marshall Jones in the House of Representatives, and Grace Williams in Moot Court. Brad Crofford, graduate student at OU and SNU Alumni class of 2014, helped coach the delegation, drawing on his 11 sessions at O.I.L.

O.I.L. is a five-day mock legislative session in the Oklahoma State Capitol once a semester consisting of delegations from over twenty universities across the state. It also includes a moot court competition and model executive branch.

SNU received .5 discretionary points from the President Pro Tempore, who only has 2 points total to award to delegations amongst other leaders. Williams won 3rd place in the Moot Court Competition. SNU also had one of highest number of community service hours.

The President Pro Tempore said that she could not tell that SNU was a delegation of completely zero stars (or beginner status in O.I.L.). SNU’s OIL delegation went inactive from Fall 2013 to Fall 2014 due to a poor leadership change after Spring 2013.

Harms wrote a bill increasing the minimum wage for tipped employees, and it was passed by the O.I.L. House, Senate and the Governor.

Harms said, “I’m excited that something I am so passionate about is going to be seen by the actual legislature. I like that my ideas are being taken seriously by the older generation.”

Every session, a packet of the most progressive legislative ideas is compiled and delivered to the state legislature and has brought about concrete changes in the state in the past. Since Harms’ bill was passed, it is likely to be included in this packet.

Crofford said, “I was really impressed by SNU’s delegation this semester. Hannah did a fantastic job as delegation chair, and I know they will be in good hands in the future. Harms’ legislation is impressive for anyone, much less someone in their first semester! I think Grace is only the second person in the past six years from SNU to do the Moot Court competition. I hope others will give it a try next semester because it’s a solid, educational competition.”

O.I.L. can be taken as a 1 credit hour class or simply an extracurricular. They typically meet on Thursday nights at 8 p.m. Contact Hannah East, heast@mail.snu.edu, for more information.

Schuster said that she took the class because “the experience really brings to life what you read in a textbook for government class. It’s one thing to read how government works, but it is completely different to take part in the process.”

There are also several social events included in the O.I.L. session schedule such as dinner at the Governor’s mansion, a date auction, and several guest speakers. Every member who attends even one session will undoubtedly come away with a wealth of new professional contacts, a broader view of state issues, and friendships.

[author image=”https://echo.snu.edu/wp-content/uploads/2015/05/Grace-9.jpg” ]Grace Williams, Editor-in-Chief Grace is graduating this May with a degree in Sociology and minor in Spanish. She will be teaching English in Spain following graduation. [/author]