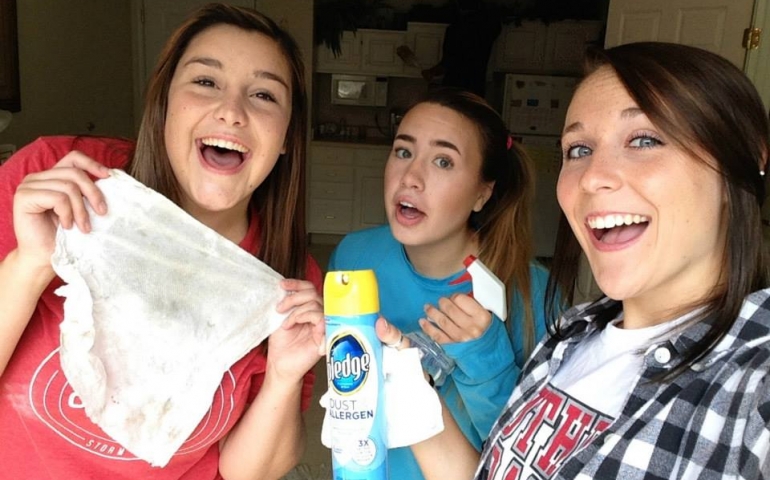 Volunteers worked in 90 degree heat to clean up the yards and houses of many Bethany community members. The group first met together by the tennis courts, then split up into smaller work teams in order to make the work more efficient.

Despite the tough work, students received no direct pay for their efforts. Instead, they participated out of love for their community and the desire to be around their peers.

The previous Sophomore Serve occurred on September 13th and saw students assisting the elderly at Southern Plaza Retirement Community. It was the first of its kind at SNU and attracted numerous students to serving in the Bethany area.

When asked why sophomores were targeted for this event, Student Success Services director Misty Jaggers says that it was designed to help beat the Sophomore slump.

“You’ve got your freshman year where you’re new and… it’s all exciting, and your junior year you get to more into your major and internships,” Jaggers said. Sophomore Serve was created to help students invest in their community while helping them stay connected on campus.

Despite the tough work in the heat, sophomores who participated enjoyed being able to have a positive impact on the world while spending time together. Student Tyler Thornton said that he had a positive experience because he loves yard work.

“The lady was the sweetest lady you’ll ever meet,” Thornton said of the woman whose yard he helped clean. “And, she made us cookies!”

Hazel Brooks served by trimming trees and raking leaves at the house of an elderly community member. She said she just wanted to help out wherever she was needed.

According to Jaggers, more Sophomore Serve events are planned for the spring semester. However, at this time the dates or activities aren’t “totally nailed down yet.”

Brooks wishes the school would sponsor more events like this. “Next year I’m going to be a Junior,” she said. “I’m not going to be able to do Sophomore Serve.” She believes that Sophomore Serve type projects could involve all grade levels, in order to include as many people as possible.

While it is unknown whether or not the school will host a wider variety of service-related projects, numerous students told The Echo that they had an enjoyable time during SNU’s second Sophomore Serve.