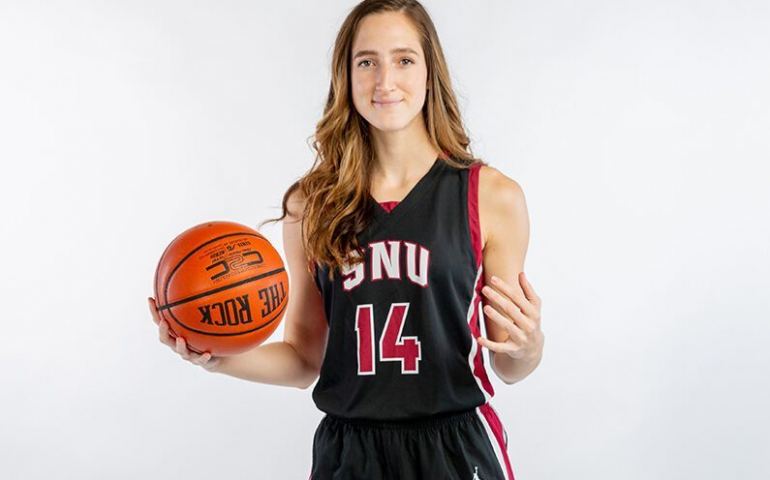 SNU senior Abby Niehues recently broke the All-Time SNU record for career blocks. This record was set on her 310th blocked shot. She has also broken the All-Time Great-American Conference career blocks record. It is obvious that Abby is a force to be reckoned with in the defensive paint. We are all very proud of Abby here at SNU and the impact she has made on and off the court.

Prior to Abby breaking the All-Time SNU record, it was previously held by SNU alumni Katrina Springer. Katrina played basketball here at SNU from 1988-1992. She loved everything about playing here, including the coaches and lifelong friendships she made. When asking what she would like to say to Abby, Katrina responded, “Congrats! You are a blocking machine! I wish I could have seen you play in person. I think it is really awesome that you broke the record that I held, especially since your mom, Christy Niehues, and I were teammates.” Abby loves that her parents went to school at SNU, and knowing Katrina played with her mom is pretty amazing.

If you know Abby at all, you know how humble she is as a person and player. This accomplishment is something she is going to remember for the rest of her life, and she has worked very hard to get to this point. When asked what this accomplishment means to her, she said, “It means recognition for the hard work that I’ve put in for the last 4 years. It is also extra special because my parents went to SNU and I got to put my name in the record books of the place where they met and also played basketball.” Abby’s parents must be beyond proud of her.

Abby is very close with her teammates and believes they have had a huge impact on her. She mentions, “My confidence and skills have improved on the court because of the people I’ve met through the program, as well as my confidence in myself off the court.” Having teammates that push you to be better every day is very important and helpful. They are the people you spend most of your time with during the season, and you build life-long friendships from these experiences. Abby is an amazing player and person, and she has worked so hard to achieve this amazing accomplishment that will go down in the SNU record books. If I were you, I would stay away from the paint!!