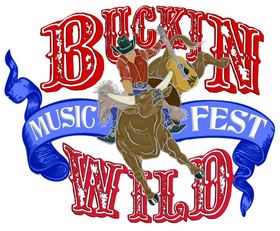 ACM-nominated duo Love and Theft’s Stephen Barker Liles announced the launch of Ticket sales last Friday, April 11, on 96.5 FM – KECO where they also gave away a pair of festival tickets.  During the interview, the station debuted and added to their rotation Love and Theft’s new single, “Night That You’ll Never Forget,” which was named the second most added song on Country radio that week.  Stephen Barker Liles concluded the interview saying, “Buckin’ Wild Music Fest will be a couple of nights that we’ll never forget!”

This All-American, home-grown festival is designed from the ground up to get fans throughout the region excited about having a festival in their neck of the woods.  Festival founder and producer, ALL Entertainment LLC Managing Partner Donny G. Liles says this exciting annual event is about keeping it real.  “We have great artists who will deliver fantastic entertainment, but most important will be the people they’re entertaining,” asserts Liles.  “I know it will be a success when I hear people saying, ‘This is OUR festival.’ ”

The 30-man novice invitational bull riding competition will be held Saturday morning and overseen by world-champion bull rider, and a founder of the Professional Bull Riders (PBR), Cody Custer, where he will be looking for future champions. The winners will share a $4,000 purse/100% payback.

For the full festival experience, guests have the opportunity to join in the adventure of red dirt camping. With the Red-Dirt Camping option for ages 14+ and Red-Dirt Plus camping for all ages, guests will get to stake their claims in this all-inclusive experience with the two-day festival ticket.  Guests may even put together groups of 20 or more campers to share in the adventure.  Additionally, campers 18 and older may take part in the festival’s post-show barn dances on Friday and Saturday.  VIP Camping and Single Day tickets will become available for purchase soon and will be announced through the festival website.  The Buckin Wild Music Fest App is also gearing up to launch in May. “We’ll have plenty of water, and food vendors. Be Red-Dirt-Ready and bring your boots,” said Liles with a big smile, “It’s dusty out here!”