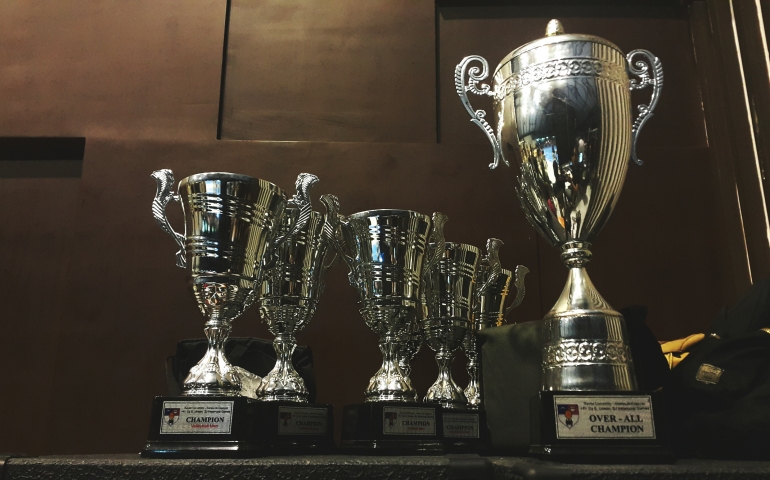 As the new school year begins, Southern Nazarene University (SNU) is making changes around campus. One of the larger changes can be seen in SNU’s intramural program; not only will there be new games, a new interface for registration, and different tournaments, there will also be competitions against Oklahoma Christian University (OC). These new additions are intended to get students involved and continue building relationships between students and athletes.

In addition to the many changes occurring with the intramural program, there is also a new leader: Chris Kyzer. He is the Director of the Undergraduate Sports Management Program which includes the Sports Business and Sports Communications majors as well as the Director of Intramural Services at SNU.

Kyzer is attempting to reenergize the intramural program, saying, “We’re starting with a new direction… we’ve moved to a management system through an app called ‘IMLeagues’ that allows us to make schedules, fill rosters, build playoff schedules in a much faster way than traditionally.”

This app not only makes it easy to manage intramurals, it also becomes easier on the players– IMLeagues only requires a student to sign up once for their entire college career. Through this, students can find their stats, view their schedules easily, and keep their virtual trophy case to track their victories. Students will also be able to sign up for specific teams or enter as a free agent for many of the sports.

Another event Kyzer has been planning are games against OC. He recently finalized flag football and basketball games against OC in November and March; SNU will host the flag football game in November while OC will host the March basketball game. This new addition to intramurals will hopefully encourage healthy rivalries while also building a relationship between the two local schools.

John Haile, Student Director for Intramural Services as well as I-Captain, is working to connect students and faculty to intramurals, attempting to get as many people involved as possible. He states, “We are making intramurals more structured, putting limits on teams and who can play on those teams… that way we can get as many teams in as possible so everybody that wants to play has a chance to play.”

In order to take advantage of these changes, Haile said, “Sign up and play. That is the best way to get involved… if you keep playing, then maybe down the road you can become an I-Captain. It’s a great way for people to get involved with their community.” Haile went on to explain the relationships he built from intramurals, describing how he felt closer to the people of SNU through his experience.

As changes occur in this program, people must participate in order for the changes to be successful. If you are interested in getting involved with intramurals, sign up with the app “IMLeagues” and contact Chris Kyzer if you have any questions.