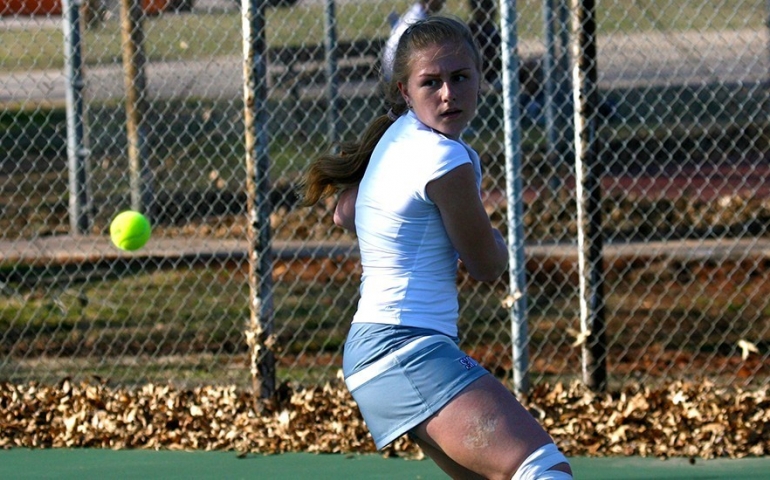 To get inside information on the 2016 tennis team at SNU, I sat down last week with returning player Polina Chala and true freshman Judit Mas.

Polina Chala is a returning sophomore from Khariv, Ukraine. After asking her what it was like her freshman year adjusting to a new country and meeting new people, she responded, “It was a big change for the first few months; it was very hard to be able to adjust to a new culture. After a few months it started getting easier, and later I started talking freely and was aware of the culture traditions.”

Chala is in her second season of eligibility, so she has some pretty high expectations of being a leader.

“As a sophomore, I’m expecting to be involved with the team, and I will try to provide support for all of my teammates,” Chala mentioned. “I think it is important, because I’m one of the people left from the previous season, and I’m sure in our success we will be very talented.”

Chala then went on to talk about the offseason and how the first match went.

“The offseason personally for me was very good; I got to go home. I was working during the summer. Since we have a season during the spring we were practicing in the fall, and [we] played in a few tough tournaments,” said Chala. “The first match went very well; we started off with a victory over Texas-Permian Basin, and we hope to…be way more successful.”

She also talked about the huge differences from Ukraine to Oklahoma.

“I would say it’s quite a bit different, starting [with] the culture, food [and] traditions. One of the biggest differences is the way people dress here; back home you wouldn’t see people wearing pajamas or sweatpants. Usually students are wearing casual or professional clothes. Also, back home people are more focused and more serious about their duties.”

Judit Mas is a freshman out of Vic, Spain, who, after asking her what it has been like for her coming from Spain to Oklahoma, she replied, “Traveling to a foreign country I was a bit afraid, but excited as well. It was a completely new experience, and that’s why I decided to try it”.

She also talked about the process of getting to the United States.

“When I decided to come, I had to work really hard to get to a university; it had a lot of ups and downs,” Mas continued. “The worst thing was the traveling. It took around 18 hours to arrive. I had to take three different flights and [wait] between 3 to 5 hours at each airport. Before coming here I was afraid of taking a flight alone, but now I think it is pretty easy.”

She also praised SNU for making the university feel like home.

“SNU is not a university like others; here people are really nice and open. Since I arrived students and professors have helped me a lot. They make me feel much more comfortable in a place far from home.”

Mas then compared it to the universities in Spain.

“Universities in Spain do not have sports like SNU does. All the universities in America have this competitive spirit to sports, and I love it! Living on campus also makes me feel like I am part of this university, and it is similar to Spain’s universities.”

She finished with discussing the differences between Spain and Oklahoma.

“A big difference is the food, that is one thing I miss about Spain. Another difference is that everything in America is huge. Places like Wal-Mart here are big. Also every place is far [away], so you need a car for everything. In Spain people walk from place to place.”

For more information about the 2016 tennis team, click here.