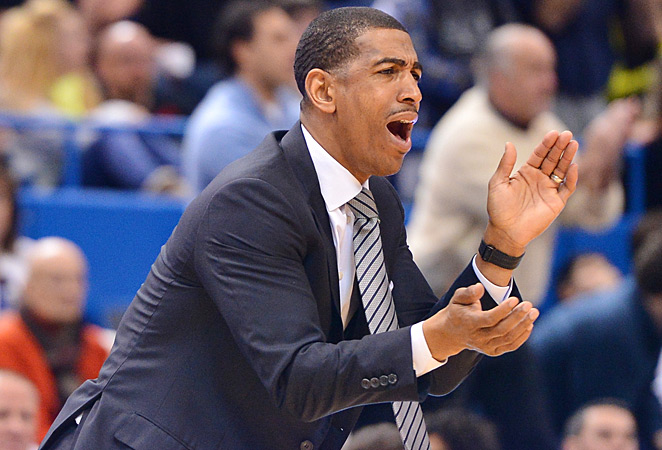 Who is the young coach that just won the Men’s NCAA Championship one might ask? Well, some would be surprised to find out that he used to be a part of our Oklahoma City Thunder (2009-2010). That’s right, this mystery man was right there on the court playing alongside our very own Durant and Westbrook. The same tenacity that Kevin Ollie played with has been transferred over into his coaching, often looking like he is more prepared to break into the game than anyone else on the sideline. With an attitude like that, it’s no wonder his team made it all the way!

It was only four years ago when Ollie was still playing point guard for the Oklahoma City Thunder. He played four years for Jim Calhoun at the University of Connecticut, back in the early 1990s, and upon retirement from the NBA, he became Calhoun’s assistant coach.

Ollie’s career consisted of twelve National Basketball Association (NBA) franchises in thirteen seasons, spanning 1997 to 2010. In the 2005–06 season, Ollie was given a starting role by the Sixers’ head coach, Maurice Cheeks. After that, Ollie moved to the Minnesota Timberwolves, where he was made captain during the 2008–09 season. He was then signed by the OKC Thunder on August 1, 2009 for the veteran’s minimum. After the season, Ollie retired to join the Connecticut Huskies as an assistant coach.

Ollie did not have a stacked coaching resume for the job but still managed to get the position upon Calhoun’s retirement. He had only been on the coaching staff two years before taking over the Huskies program in advance of the tournament. Then, at 41 years of age and in his first year as a head coach of a team that could compete in the NCAA tournament, Ollie proved a lot of people wrong, winning the Championship.

In an interview with Grantland, NBA player Kevin Durant said that Ollie “taught him the ropes” and “changed the culture of Oklahoma City.” He also said, “Kevin Ollie was a game changer for us. Just his mind set and professionalism that he brought every single day. And we all watched that, and we all wanted to be like that. It rubbed off on Russell Westbrook, myself, Jeff Green, James Harden. And then everybody who comes through now, it’s the standard that you’ve got to live up to as a Thunder player. And it all started with Kevin Ollie.”

It is always interesting to look back on the people who have come through Oklahoma and had an impact on our state and our state on them. Coach Kevin Ollie just happens to be one of those special people.