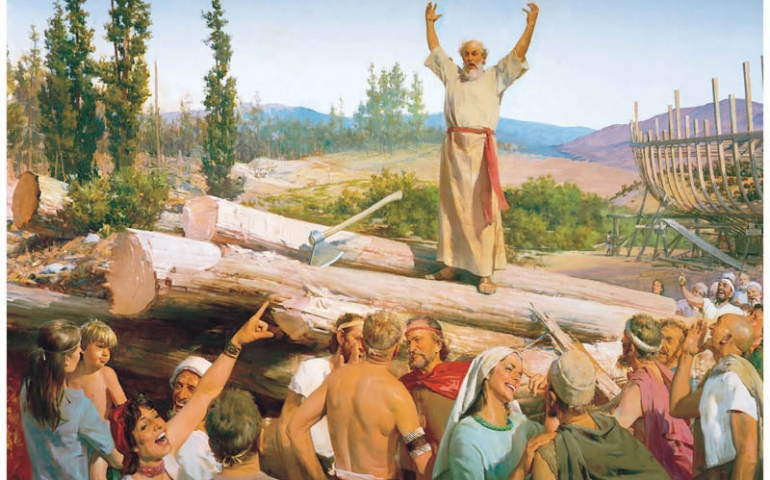 Note: This article is written with conflicting views in order to explain the conflicting opinions and controversies associated with this film among Christians and nonchristians.

The story of Noah is one known by many individuals, Christian and non-Christian. In its most basic form, the story is as follows: God creates the world, the world betrays God, Noah’s family stays true to God, God tells Noah he will flood the Earth, God also tells Noah to build an ark, Noah builds the ark for his family and two of every animal, the flood comes, 40 days and 40 nights pass, the flood dissipates and the rest is, literally, history. As a whole, the movie does stay true to this very basic plot, as well as adding some details and imagery that are quite helpful.

One theme that is common throughout the movie is the link from Adam and Eve to Noah and his time. It explains the purity of the world before Adam and Eve sinned and the symbolism of the flaming sword and the flood. (Adam and Eve were run out of the garden by a flaming sword.)

Later, the movie emphasizes that God wanted to purify the world with a flood. This shows a theme that fire destroys but water cleanses. The movie stays with the creation theme again when it portrays a wonderful animated creation sequence. This scene shows the creation of the universe to the forming of man. It was truly humbling to see the formation of the universe in fast motion.

Just as the story goes, mankind as a whole had become corrupt and was evil in the eyes of God. This feature of the story told in the classic Sunday school setting makes overall extent of this evil seem extremely mild. Portrayed in the film, however, is a world completely and hopelessly engulfed in sin without any care towards “the Creator.” It is easy to forget the severity of the betrayal after the Garden of Eden. The director does a wonderful job in showing the justification of God’s anger.

Helpful fallen angels? Thankfully it’s not like they were fallen angels who had sided with Satan; no, these were the helpful kind. One of the controversial elements in the movie is the depiction of angels that fell from heaven to assist adam and Eve and were therefore punished by God. But don’t worry, they aren’t demons, they are Watchers. Totally not the same thing. And it’s also super convenient that they decided to help Noah build the ark. I mean, how else could that have been done? Aliens? Oh please, that’s preposterous. Demons? Nah, Watchers are where it’s at.

Confusing time lapses are also present throughout the movie. During the film, Noah tells the creation story from the Bible, a very cool scene. As he is telling the story, the movie shows stop motion visuals to go with it, which are also excellent. The ugly part is that the visual is a stop motion of evolution, starting with the cells combining in the oceans to become fish, the fish crawling on the land to become lizards and the lizards slowly becoming monkeys.

So while it was a really beautiful visual effect, it may contradict with a lot of people’s beliefs about creation. Also, the movie interprets the meaning of ‘day’ as several billion years. Timing contradictions appear also when the Bible talks about it taking hundreds of years to build the ark, yet in the film it appears as if it only takes a few years.

The ugly conclusion is that I (Byron) had gone into the theater with massive expectations for this film. To me, the perfect Christian film would have had awesome acting and stuck to the source material (the Bible). And while the acting was great, the source material was severely tweaked for better drama. So, in my mind, this movie has fallen very short of what it could have been.

Feel free to join in on the Noah conversation by commenting below or writing The Echo at rfisher@mail.snu.edu.