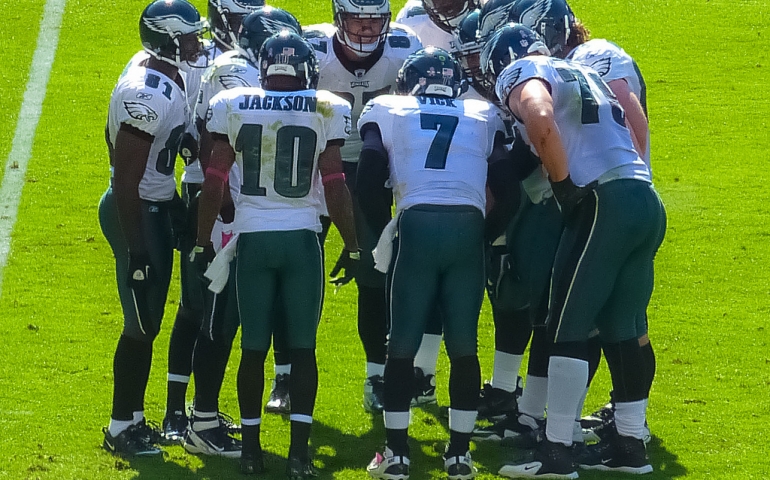 The three time All-Pro wide receiver Desean Jackson was cut from the Philadelphia Eagles on March 28,14. There have been numerous rumors floating around the NFL and media about the cause of Desean’s release.

Jackson is one of the most versatile players in the league; with 21 receptions, he leads the NFL in the most 30+ yard receptions during division games since 2008 while stacking seven touchdowns. The former Eagles player has the most 40+ yard catches since 2008 with 35 and his blazing speed allows him to stretch defenses.

He was the number one receiver for the Eagles with a career high season; 82 catches and 1,332 yards with %7.2% in 2013. With electrifying speed and quickness, Jackson seems to provide a valuable asset to his team; he has a rare ability to make players miss in open and closed space.

According to NJ.com, Jackson was released from the Eagles because of gang involvements and activities.  Jackson was raised in Los Angeles, which is the birth of the Crip and Blood gangs, which have now spread all across America.

Hearing rumors about being traded, Jackson had met with the head coach of the Philadelphia Eagles Chip Kelly, who will be going on his second season in Philly after previously serving as the head coach for The University Of Oregon.

After the meeting with Coach Kelly, Jackson went to social media to let them know what occurred, posting, “Good to talk to Big Chip today!! Say or hear what ya want!! The picture speaks for itself!! Winner.” Jackson reports that Kelly told him not to “worry about anything and keep working hard and be ready for camp.”

A few days after this post, Jackson was released and the organization made statements saying, “After careful consideration over this off-season, the Philadelphia Eagles have decided to part ways with Desean Jackson.” Some spectators believe that Jackson was released because of bad behavior and bad presence in the locker room.

The coaches use to tell the rookie players to not hang around Jackson because he was a bad influence due to his off-field habits.The Eagles organization felt that Jackson had a weak work ethic, bad attitude and consistently missed meetings, perhaps because of the poor company the player kept.

Teams like the Raiders and 49ers’s contacted the Los Angeles Police department to check Jackson’s police record to see if he has been involved with a gang; reports confirmed that Jackson has no traceable connections to gangs. Rather, it seems that Jackson is guilty by association.

After all of the suspicion and turmoil, has recently signed a contract with the Washington Redskins.