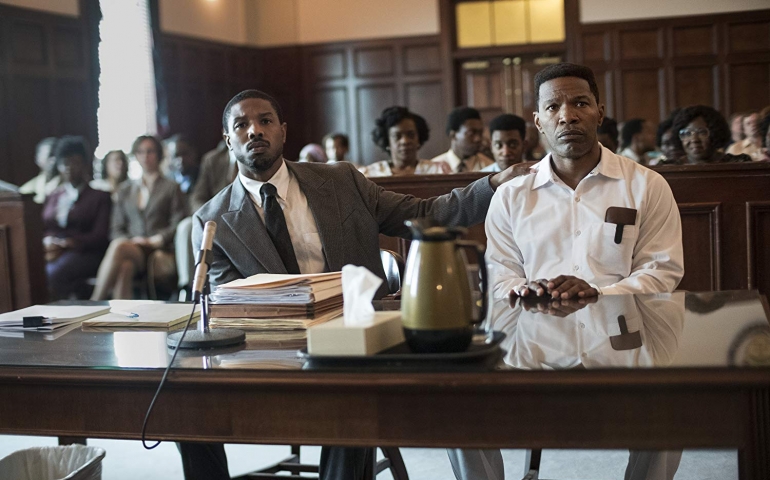 Just Mercy, released on Jan. 10, 2020, stars Michael B. Jordan and Jamie Foxx. It tells a very important, stimulating and emotional story of injustice. The trailer alone provokes emotions and thoughts that spark a desire to go see this entire story unfold. After seeing the trailer we headed to the closest theater, Tinseltown, to see it.

Just Mercy is centered around Bryan Stevenson, played by Michael B. Jordan, who is a young lawyer right out of Harvard law school. He has a big heart accompanied by a deep passion to “achieve justice,” which is a phrase he uses multiple times throughout the movie. Bryan shocks many when he decides that the place he will begin his career in justice is Alabama. His goal is to provide legal assistance to and defend those who have been wrongly accused, convicted and condemned. Eva Ansley, played by Brie Larson, stands by his side as a supportive friend and co-worker with a similar drive and passion to achieve justice.

Walter McMillian, played by Jamie Foxx, was one of Bryan’s first cases. After meeting Walter, also known as Johnny D, Bryan is determined to get him freed. Walter, or Johnny D, was sentenced to death after being arrested for the murder of an 18-year-old girl. After looking into Walter’s case further, Bryan found overwhelming evidence that would prove his innocence to this crime. There was one single testimony against him, which came from a man who was coerced by the state to lie, his motive being that he would get off of death row if he would cooperate.

This movie shows the fight put up by Bryan and several others alongside him to get Walter, among others who are innocent but have ended up on death row, freed. The movie gives a glimpse into what being on death row might have looked like for these men. It is extremely powerful to see into this life that people are living still today. There are many ups and downs throughout this film, and it is certainly not sugar-coated.

Emily Nana, Julia Glidden and myself went to see the film because it is important to know what is going on in this world. Movies like this one, although it’s not all factual news, allow you to see what situations like this look like in a deeper way than just hearing about random cases with random people. This compels me personally to want to know more and do more.

When asked what her thoughts and/or feelings were after seeing this movie, Nana responded, “My initial thought was just disbelief that this really happens. There is so much injustice happening, people’s lives being ruined, and so many of us just sit back and live our lives as if the laziness within the justice system that is portrayed in this movie is not even happening.”

I then asked Julia Glidden why she thought it was important that other SNU students see this movie, and others in general. She responded with: “I think it’s important because I have a suspicion that many people, like me, may not know very much about the death penalty. This movie allows our eyes to be opened to what really goes on. It allows us to get a small glimpse of what life on death row looks like. It shared that many people within the justice system have been wrongly convicted, like one of the main characters Johnny D. We should never stop seeking to learn more about these types of things going on in our world.”

As Christians, we serve a God who is just. Therefore, our hearts should break at injustice just as His does. It is important to be aware of the injustice happening in our world, even if we find out about them through a form of entertainment, like a movie, so that we have the chance to be compelled to act on injustice and represent Christ well. This, in turn, reflects well on SNU, a Christian university.

This film is an important and compelling story of the fight between justice and injustice that I highly recommend anyone and everyone make time to go see.

It is hard to not want to go see the movie after watching the trailer which is linked below: