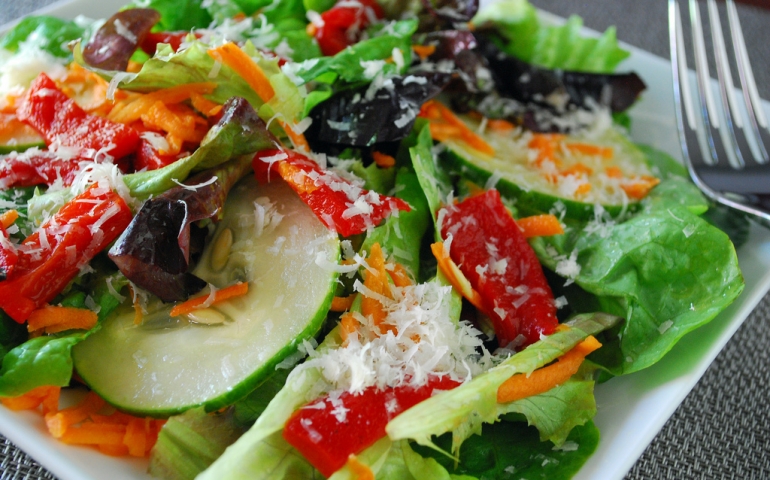 As the vegan who is munching on that salad at lunch with a table of friends eating the standard omnivore food, it is always interesting for me to hear what omnivores think about concern for animals in society. Having also been one before I went vegan three years ago, I enjoyed reading the opinion article “Food Talks: what your diet says about you”[1] in last week’s Echo to get some perspective on my own thoughts about the issue. If I may summarize, the article cites a recent study from the journal Appetite showing trends in Americans who, in many cases, become vegetarian based on considerations coming from a particular worldview that differs across cultural identities.[2]

Another way of saying this is that, given any moral question, in examining our dominant explanation for why we think the way we do, we tend to either ask whether somebody is being harmed or treated unfairly or whether the respect is being given for the rights and privileges of certain social groups. The Food Talks article claims that, since people base their decisions on cultural norms that further guide how they view the world, their personal values cannot be reduced to this or that behavior—that people are “more than their diet.”

Namely, the writer argues, if vegans and vegetarians make moral decisions based on concerns for the treatment of animals and the environment, omnivores can also have concerns for these issues. In her words, it shouldn’t be a problem for someone to be an “animal lover and enjoy hikes in national parks” while also choosing to eat animals.

This is where I might offer an alternative perspective. If in a (really cool) world where we could speak to animals, I would want to ask animals used for food (cows, pigs, chickens, and so on) how they felt about humans killing and eating them. Would an animal feel more loved by those who participate in omnivore or vegan lifestyles?

It’s just a simple thought experiment, but I think it points to an important point: it’s no question that we like to think of ourselves as caring, compassionate people. But sometimes our practices don’t make it that simple. For those of us who eat at Sodexo, we participate in the American industrial agriculture business on a daily basis. What that means is that, for the animals who were killed for the food that ends up on our plates, they are almost universally born and bred in factory farm conditions.

Because we are so kept in the dark about where our food is actually coming from, it’s pretty easy for us to be able to stomach it. Most of us are unaware that pigs are kept in cages so small they can’t turn around, birds have their beaks cut off, and chickens bred for meat are born to grow so large that their legs literally snap from the weight. Even though we all want to protect animals like dogs and cats from abuse, we often forget about the animals we eat for food—who are subjected to the most cruelty every day of their lives.

When confronted with the process that goes on behind the products consumed by omnivores, I think it’s more important to examine personally whether or not these processes are “caring.” Vegans are simply those who have found that those processes are not and have made changes in their lifestyle accordingly.

While I sincerely admire the writer’s concern for respecting people without judging them on arbitrary conditions, I, at the same time, think it’s hard to escape this hard-hitting recognition: is it not odd for animal “lovers” to participate in the killing and eating of animals?

Would a more consistent position be, in the context of this article, to ensure that animals are not harmed by one’s lifestyle choices? For anyone who takes the time to watch a YouTube video of how these animals are treated for their food, what in that treatment is “caring?” If we do not take these animals’ interests (namely, to live a free and happy life) into consideration, what do our diets say about us?