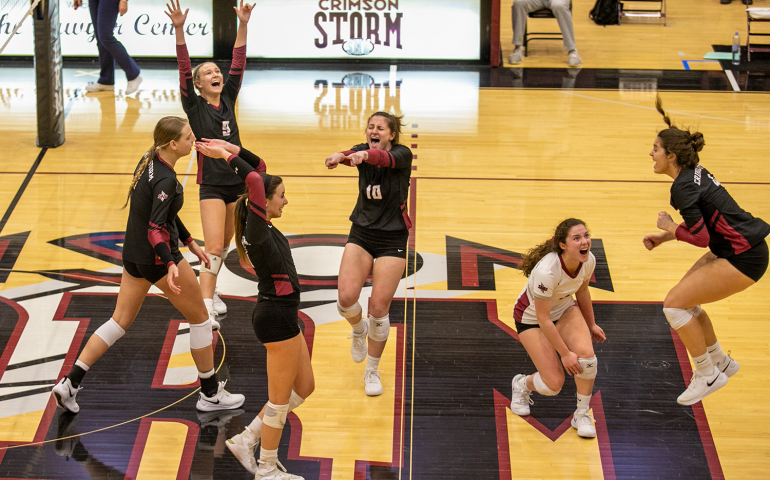 On September 23, SNU senior volleyball player Meagan Ellis entered the 1,000 career kills club against Southeastern Oklahoma State. She became only the 11th member of this club in SNU volleyball history. A “kill” refers to when a player scores by spiking the ball.

Ellis has played volleyball her whole life, with her family being her biggest support system throughout her career. “My mom used to be my coach when I was first learning how to play volleyball and my dad has always been my loudest fan in the stands and made sure I knew he was there,” says Ellis.

Ellis has loved her career here at SNU, and is very appreciative to everyone who helped her get to this point. “I am so grateful to have this team and everything SNU volleyball has brought to my life. Reaching this milestone was a huge accomplishment and I couldn’t have done it without everyone helping me along the way,” said Ellis. There is nothing better than getting to play with such a supportive and loving community.

Fellow senior teammate Grace Miracle has been here at SNU with Ellis over the past 4 years. “Being Meagan’s teammate, I have gotten to watch her grow, not only as a player, but also as a teammate and person. She has been one of my biggest encouragers this year, and just to see her reach such an awesome goal makes me so proud of her,” says Miracle. Not only does this reflect the talent of the volleyball team, but it also shows the characters behind these female athletes.

Ellis was able to reach a goal she set for herself because of her hard work. Being only the 11th volleyball player at SNU to reach this milestone is a huge accomplishment that will go down in SNU history. What a great way to kick off her senior year. However, there is more that the SNU volleyball team hopes to accomplish in their season. Go out and support your volleyball team as they play Southern Arkansas at SNU this Friday, Oct 15th, at 4 P.M. Congratulations on such an amazing accomplishment Meagan!