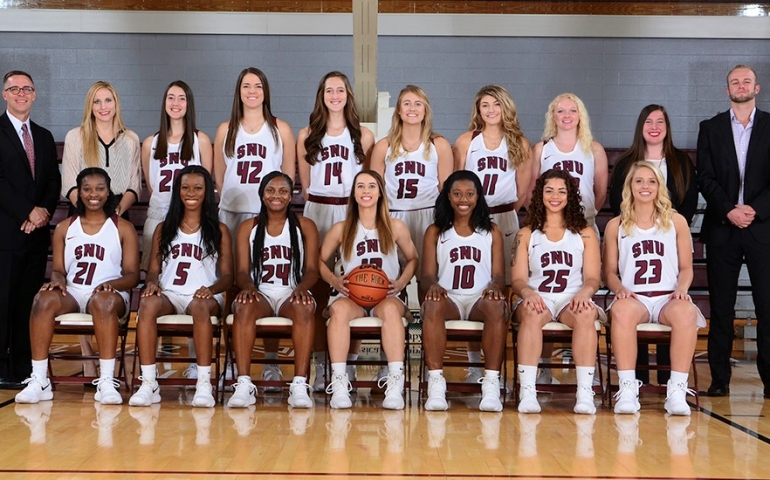 Our Southern Nazarene University women’s basketball team has started the season off great. As of now, they are currently undefeated with a record of 3-0. Unfortunately, they do not have home games in the month of December.

Let’s meet some of our athletes.

Alexus Jones is a freshman this year, studying in pre-physical therapy. She is from Burleson, Texas and has been playing basketball since she was about five years old. A fun fact about  Alexus is she loves to make others laugh, and in her free time, she looks forward to watching Netflix. Her favorite 90’s jam happens to be “Say My Name” by Destiny’s Child. After college, she has plans to own her own practice in physical therapy.

Madeline Schroepfer is a junior, studying pre-physical therapy. She is from Rockwall, Texas and enjoys playing with puppies or eating an excessive amount of deserts while watching a movie during her free time. Her position on the team is the point guard and the “hype man.” Her favorite 90’s jam also happens to be “Say My Name” by Destiny’s Child or “No Scrubs” by TLC.  After college Madeline plans to become a doctor of physical therapy.

Julia (Jules) Schwake is a freshman, studying mass communications. She is from Houston, Texas and enjoys hanging out with family and friends during her free time. Her position on the team is a shooting guard. “California Love” by Tupac and “I Want it That Way” by the Backstreet Boys happen to be her favorite 90’s jams. After college Julia hopes to get an internship with radio or television with the Oklahoma City Thunder. Her plans are to one day become a sportscaster for a sports network.

Irene Perez is a sophomore, studying physical education. Her position on the team is guard. She is from Valladolid, Spain and after college, she would like to move back there and continue playing basketball. While she is there, she hopes to be a physical education teacher or physical trainer.

Addison Foster is a freshman, studying sports management. Her position on the team is also guard. She is from Lubbock, Texas and enjoys sleeping during her free time. “This Is How We Do It” by Montell Jordan is her favorite 90’s jam. If you need ever need someone to say the alphabet backwards, she is your girl. After college Addison plans to coach basketball.

The SNU Women’s basketball team’s next home game will be held on January 4th. Come out and support as they take on Harding at 5:30 pm!