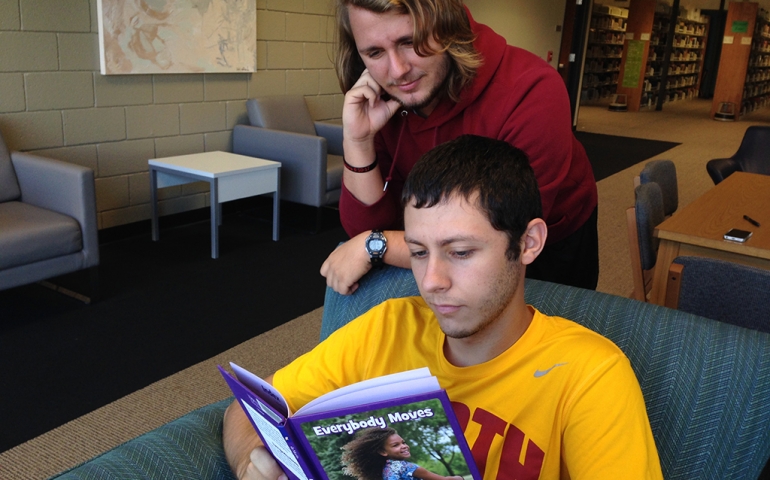 Snowbarger Hall has been known for the shenanigans that, for many years, college guys have participated in. From painting walls to throwing mattresses out windows, Snow is a historical place of pranks and fun. This year, the poor old building decided to bite back against some well-to-do citizens.

A group of guys decided they all wanted to live on the same floor this year, so they signed up to live in the basement. Snowbarger is historically known for the flooding basement, but these fearless boys decided to waltz in the face of danger. The problem had been fixed, but little did they know what they had coming for them.

Jacob Grimm, Russ Frisbee, Brandon Clements, Chase Grantz, Zack Peterson, Jonathan Siems, Zane Brake and Greg Johnson were the chosen ones to live in the basement for the first time in many years.

After brief bliss, this clan of friends had to recognize they were living in a problematic area. Water never got inside of their actual rooms, but there was wet carpet and a little bit of standing water. The original problem had been fixed; the exterior walls were the problem and that had been deemed fixed and was not a worry. This new problem was a leaking pipe which would leak extensively into the foundation of the building, causing bigger problems than just a little wet carpet.

Andrew Tycksen, resident of the basement, said, “They had those big fans that they use in the Commons, when the AC goes out, placed in the halls blowing on the wet spots to keep them at bay, but I’m not sure the water would have ever come very far into the rooms from the hall, if at all.” The issue was not a huge one but it was still a concern.

Everyone wants college guys to take consistent showers, but this wouldn’t be the end of their shower problems. Brandon Clements, previous resident of the basement, said the reason people weren’t living on the second floor was because there are only about four good showers, out of a total of sixteen, that were even functional.

While Andrew Tycksen said they only had four days to make the actual move, Russ Frisbee and Brandon Clements both agreed they were well taken care of throughout the whole process. “Katy Bradley and Tim Cole were both apologetic and helpful throughout the mess,” said Russ. They also posted motivational posters, and Russ’s favorite was the one that said “The difference between an ordeal and an adventure is your attitude.” And what an adventure these adaptable men made it.