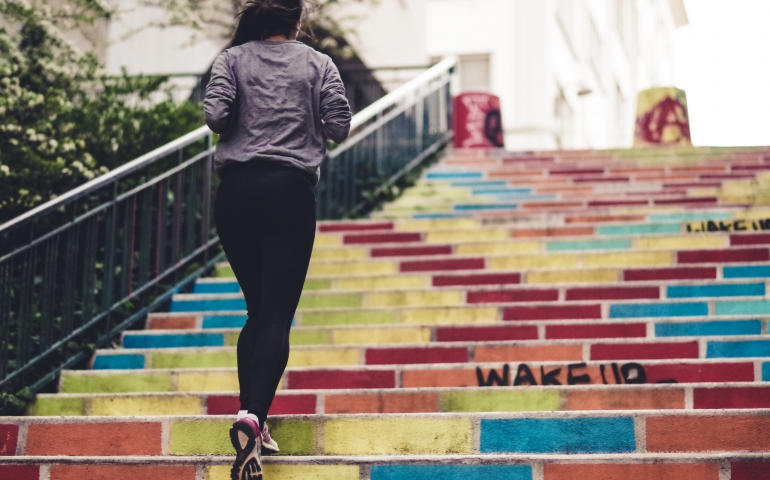 At the start of the New Year, many people make resolutions to change behaviors or begin new practices. Many choose to make a New Years resolution to get back into shape after the cold months of winter. The difficult thing about starting to get back into shape at the start of a new year is twofold: it is hard to begin something new, and when it’s cold outside. working out can be difficult. For students on campus, there are many options provided by the university for use to exercise and get into shape.

Cross country runner John Zehr said, “The first two weeks are the hardest and when most people quit. Start by doing something every day that you can do, and build off of it.” He explained that if someone wants to start running, they don’t have to begin by running a mile to work out, but that the same result can be achieved by running for a certain amount of time. At first, run consistently for ten minutes a day, once someone is comfortable with that, they should run for twelve minutes, then fifteen, and so on. It does not have to just be running either, it can be any consistent workout someone wants to do.

Junior Benjamin Scott had a unique idea as well. After every hour he spends watching YouTube, TV or playing video games, he does a workout. It would also work to do crunches or push-ups during commercial breaks if one is watching television. He said, “By doing this every time I spend an hour on technology, I’ve realized how much time I waste watching television.” By doing this, it can help reduce the amount of time spent laying or sitting down and instead get one’s body active.

For a more long-term effect whose end goal is more than just getting into shape, Luis Guerra suggested finding a local event set in the future that you may want to participate in. It can be a marathon, a 5K, a weight-lifting competition, anything. Then, find a friend who would also like to participate and work together towards being in shape enough for that long term goal. Having a friend will help with accountability as well as having someone to pace oneself with and against.

On campus, there are a variety of places to go to workout. There is the Sawyer Center with its indoor track and workout room. Mornings are the best time to work out in Sawyer Gymnasium. Not only is it best to work out in the morning, but the gym and indoor track available are not as crowded when one goes early to workout. The afternoons and evenings are the busiest times to be in the gym. Another location is Broadhurst Gymnasium. Not only are there indoor courts to play on, but there is a weight lifting room and a pool that can be used to swim laps in.

There are even apps for a smartphone that can be used to help someone stay motivated to continue their workout routine. There is Zombies Run which is an app with audio files of different lengths that someone can listen to while they run. The audio is an immersive story about a zombie apocalypse. The unique thing about this running app, as opposed to others, is that it is based on how long someone runs, not how fast. Another app is called Habitica. It is an RPG where you can set daily tasks to do, and it rewards you for completing them. The app itself is a game where you level up and can fight monsters by completing daily tasks. This app is centered on personal accomplishments and setting one’s own goals, instead of premade ones, so it can be personalized.

As students, faculty and staff alike attempt to get in shape, whether for New Year’s Resolutions or simply out of a self-driven desire, SNU provides many outlets for working out. It is possible, it just takes hard work and understanding your body to figure out what workout works best for you!

(Photo by Ev on Unsplash)