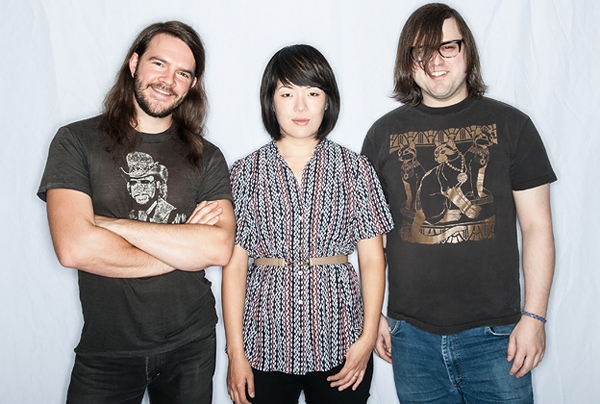 The Drop Beneath by Virginia’s indie darlings, Eternal Summers, is an interesting experience. You’re going to know whether or not you like the entire album right off the bat, simply because the 80s The Cure meets The Pains of Being Pure at Heart by way of 2014 aesthetic that courses through its entirety never at any point wavers. There’s even a little bit of Pixies thrown in for good measure here and there (see “Never Enough”).

So, if you find yourself a bit out of sync after the first few tracks, it’s a safe bet that you won’t be kicking yourself later for the time you could have spent with an album that you ended up loving. That being said, if you are attracted to what you hear, there’s a good chance that this is going to be one of your favorite albums of early 2014.

And you wouldn’t be alone in digging the sounds of lead-singer and chief songwriter Nicole Yun and co. The Drop Beneath began its nascent days as a project funded by musical kickstarter site, PledgeMusic, so without early support from fans eager to hear their next album, it might not have become a reality until some time later.

As mentioned before, one of the album’s most striking features is its 80s aesthetic, which is nurtured by producer Doug Gillard, formerly of Guided By Voices and Nada Surf. At times, it recalls more acoustic centric sounds reminiscent of The Smiths or The Sundays, but with just a bit more shimmer. At other points, like the standout opener “100,” bouncing bass and snarling guitars set the sonic backdrop for Yun’s dreamy vocals (think a subdued Cocteau Twins without the dizzying heights).

Another standout on the album is “Never Enough,” a track that takes equal parts Best Coast-style yearning/crooning and Bossanova era Pixies chord progression and wraps them around  Yun’s lilting vocals.

Of course, every album has its issues, and The Drop Beneath is no exception. Some songs seem to drag on just a bit too long, and others just flat out don’t work, but thankfully those small issues don’t detract from an overall outstanding album.

Despite the band’s name, The Drop Beneath isn’t quite what you would classify as a summer album. On the contrary, it actually fits quite nicely into its Spring release window. In many ways its like the Spring itself; surprising you with its warmth one moment and leaving you uncomfortably chilly the next. Luckily for the listener, this Spring is looking to be exceedingly pleasant.