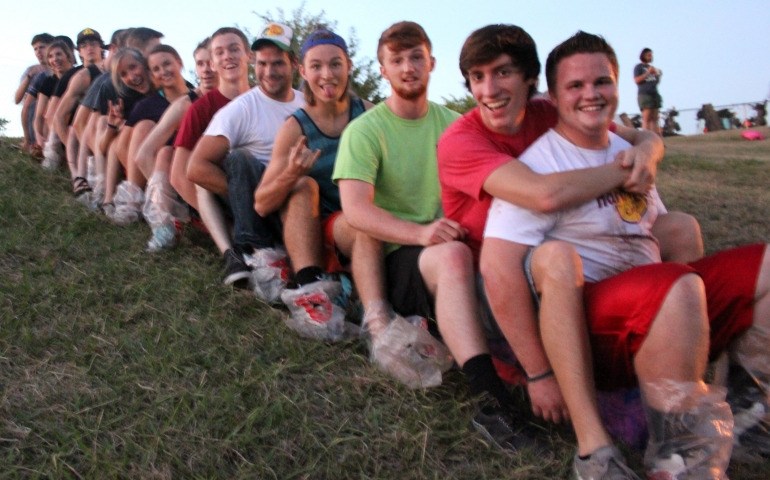 Sliding down a hill at Will Rogers Park on blocks of ice has been a thrilling and entertaining tradition for students at Southern Nazarene University over the years. This year was no different, despite the event being rescheduled from Sunday, September 21 to the following Sunday.

For those of you who have never been ice blocking, it’s simple: you wear clothes that can get ruined, grab a towel that you can afford to lose and head to the park. When you arrive, choose your block of ice from the stack, unwrap it and fold your towel on top. Once you’ve found the perfect position, sit with your block pointing down the hill, scoot a few inches forward and let gravity do the rest!

While some people find this activity boring, many students find it a perfect opportunity to get their adrenaline running. At this year’s event, several dared to slide down the steepest part of the hill in face-first positions or even attempted to use their ice block as a skateboard as they went down. Whether students did stunts or not, no one leaves ice blocking unscathed.

“Ice blocking is dangerous but fun,” sophomore Mady Martin said. “My body has thankfully recovered from it.”

Amidst the loud music and cries of joy and fear as people raced down the slope on their ice-sleds, senior Baker Pitts entertained the crowd by commentating the event with his usual sarcasm. He also encouraged people to do crazy stunts, such as forming the longest train of people going down the hill at once without breaking or taking a selfie while sliding down the hill.

“Baker was funny,” Martin said. “I really wanted to do his train challenge, but my friends refused.”

Despite the call of homework getting in the way of enjoying the night fully, many enjoyed themselves while there.

“I wished I could have stayed longer,” freshman Amanda Anderson said. “I had the best time ever, but I had to leave early because of my homework load.”

Even if you weren’t that enthused about participating in the event, Aloha Ice provided free snow cones to everyone that attended. After a particularly hard fall, many stopped to enjoy a snow cone before getting back on their blocks.

“My legs are sore,” Anderson said. “But it was worth it, especially because of the snow cones.”

Whether you come for the food or the fun, the general consensus of the student body is that ice blocking is an event every SNU student needs to experience at least once in his/her college career.