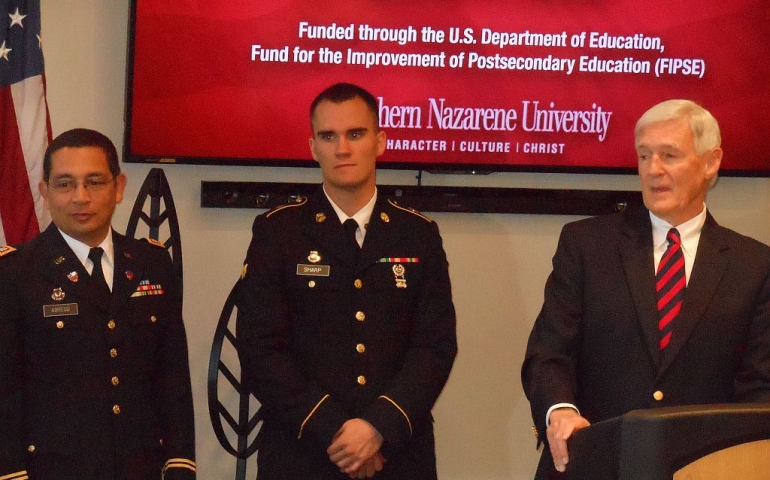 On Veterans Day, Wednesday Nov. 11, 2015, Southern Nazarene University held a press conference to announce the receipt of a $330,000 Centers of Excellence for Veteran Student Success (CEVSS) grant. The purpose of the grant is to directly support the SNU veteran population on its Bethany campus. The grant will be used to create and fund a Veterans Educational Transitions Success (VETS) Center, add a coordinator position for the center and to develop a support team for veterans that will reach across the Bethany campus and into preexisting campus offices.

At the press conference Dr. Melanie Kyzer, Vice President of Academic Affairs, described the VETS Center as “a single point of contact to work with faculty, staff and the community to comprehensively address the needs of veteran students, and help them as they transition into the academic community.” Kyzer went on to explain that the VETS Center’s programs would also emphasize veteran student outreach, recruitment, veteran specific orientation events and social support not just for veterans but also their families.

Dr. Loren Gresham, President of SNU, spoke on the military presence on the Bethany campus. “Currently…there are 230 active duty or recently retired vets on our campus,” said Gresham. “Ten percent of our student body are veterans and we are so very proud of them.”

Dr. Gresham also announced that the Veterans Affair Coordinator position, currently held by Dayna Stark, would soon be filled by Darrell Buck. Buck is currently a Staff Sergeant in the U.S. Army.

United States Representative, Steve Russell, a military retiree, was also in attendance at the press conference and spoke on the grant and the role of the military veterans in society. Russell issued a challenge to institutional grant recipients to take full advantage of the grants and to not squander them on administration costs and overhead. Russell, gesturing towards a uniformed serviceman in attendance, said “We’ve got to make sure that guys like this get degrees and get out there in the work force.”

Out of the 13 CEVVS grants issued, Southern Nazarene was the only recipient in the state of Oklahoma. In addition to the grant, SNU will contribute an additional $39,000 to help fund the CEVSS program. SNU will be the only institution in the state to have a federally funded Center of Excellence for Veteran Student Success. As SNU enters into 2016 its commitment to America’s veterans continues to increase.