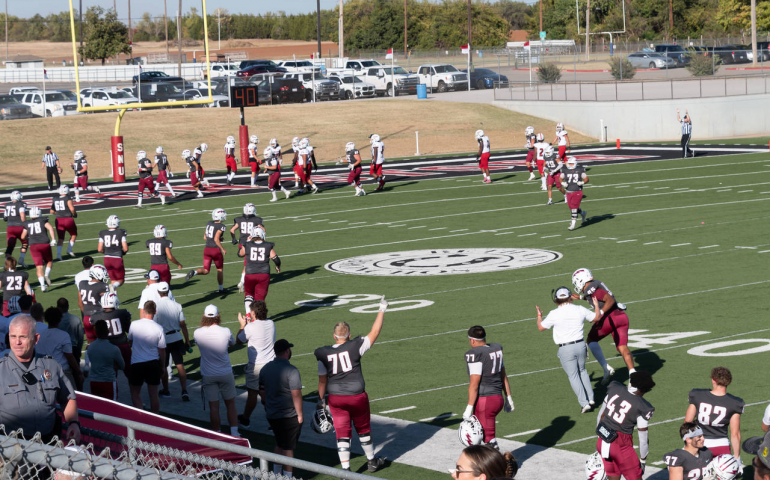 It was a wild weekend for Southern Nazarene athletics, as many teams walked away with a victory on Saturday. One came with football’s first home win of the season against the Northwestern Oklahoma State Rangers. Coming off of an impressive win against Southwestern Oklahoma State, the Crimson Storm took to their home field in this mid-October match, in which a last-minute defensive stand took home the 27-21 win.

A breezy day in Oklahoma brought forth a gem of a game, with two teams battling for a much-needed victory. SNU broke open the scoring first with a 7-yard running touchdown from Gage Porter. NWOSU would tie the game later in the first quarter, and again on their next possession to take the lead into halftime. Facing adversity, SNU would rally to tie the game as they would then match each other with touchdowns to have the game tied at 21 going into the fourth quarter.

One of the most intense and entertaining quarters in SNU football history would begin, as the Crimson Storm would chew off four minutes of clock on a drive that resulted in a touchdown. But a missed extra point gave the NWOSU Rangers a shot to take the lead with a touchdown and a successful field goal try. The Rangers proceeded to slowly march down the field taking their time to run out the clock. Within the RedZone, two potential game-winning interceptions were dropped as NWOSU faced a fourth goal with a minute and forty seconds left with no time-outs. The Crimson Storm’s defense stood tall, with great coverage in the secondary the last effort attempt at winning the game fell to the turf for the Rangers and the Crimson Storm were victorious.

Head Coach Dustin Hada was very proud of his team’s performance as they faced adversity in the game. “[Despite] being down at half time, our guys stayed resilient and put forth a great effort to finish,” said Hada. “Our players had to grow up in that game and proved that we can play great three aspects of football to get a win in front of our fans.”

SNU will play its last home game of the season against the Henderson Reddies as we celebrate our seniors and their accomplishments and contributions to the program. We hope to see you there to cheer on our boys!