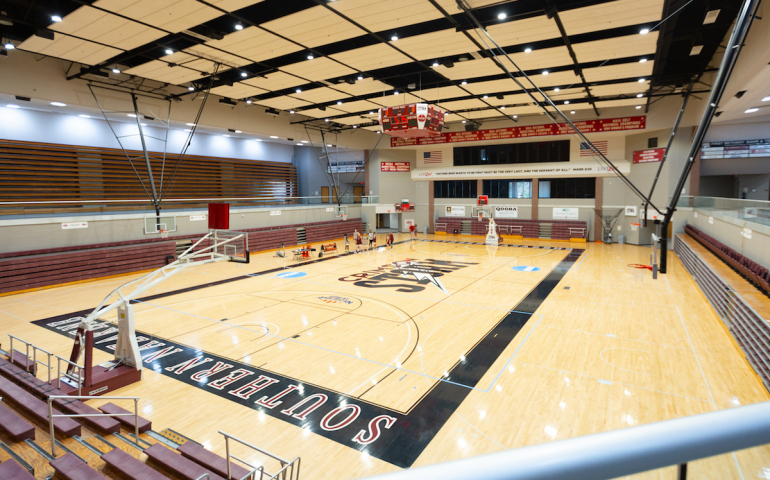 Many SNU students have packed the Sawyer Center, year after year, to come watch the SNU basketball teams play, but this year there was a ban on spectators until recently. Sawyer Center is at limited capacity as of right now and players are only allowed to invite up to four guests per player. You are still able to watch the games online and support the team, even if you cannot snag a ticket!

I was able to talk to the freshman Player of the Month, Payton Jones, and get some insight into what she is thinking about the season so far, as well as what is to come. Jones tells me that it will be “…a game changer to have fans at our games again because it is so hard to play by ourselves.” She says that “…having more people in the gym will bring more energy.”

Payton also talks about how it feels to be Player of the Month as a freshman for the SNU women’s basketball team. Jones says that “It is really exciting, I wasn’t expecting it at all.” She says that she “…is just out there playing her game, but it feels nice to be recognized for my hard work.” She tells me that she wants people to come to the games and support the basketball team, saying “Some players might have extra tickets, so if they want to come, ask around and we might have some to share!”

I was also able to interview Lexi Jones, senior point guard for the SNU women’s basketball team. Lexi also talked to me about being able to bring back fans into the facility, saying “Just being back in the atmosphere of family and friends… they are truly our biggest supporters!”

Lexi also told me about the limitations covid has put on their season, especially being Lexi’s last season. Her most important factor was “missing out on tournaments and road trips to other states to play. It was a big part of team bonding that got taken from us.” A struggle with it being her senior year has been “not knowing if we would have a season or not. From never missing a game, to going into quarantine twice, this year was very difficult. We have not taken any day for granted because we never know what obstacle comes next.”

A big goal for the entire team is winning the conference tournament; it has been long overdue and “now it is our time!” I hope that we all take the time to try to go out and support the SNU women’s basketball team and give them the support they need. Remember, if you cannot make it to a game in person, you can always watch online and support from afar!