One of the newest sensations rushing from 2017 into the new year is the new film and musical The Greatest Showman. Released by Michael Gracey, the movie received $8,805,843 on opening weekend in the United States. This movie is labeled a biography, drama, and musical.

The film follows the true story of P.T. Barnum, the original creator and showman in the circus (Hugh Jackman), as he enters the world of entertainment and his successes and failures along the way. The film also stars Zac Efron, a pristine young man who is already in show business but wants to actually enjoy his time in it.

The show is filled with music; in fact, over forty minutes of the hour and forty-five-minute film is music. It seems safe to say if you do like musicals, you will, in fact, enjoy this movie, and like some of interviewed, you may be obsessed with it.

But, even with how much people are raving about it and listening to the soundtrack on repeat day and night, not everyone likes it. I caught up with the Dawson’s who watched the musical over Christmas break, and they seemed to have conflicting views.

Kenedy Dawson without a doubt liked it. When I asked what her general feelings on the film, she replied, “Love it! The music makes it for me. I don’t think the movie would be as good if you stripped the music away from it. The storyline isn’t all that exciting but the music and choreography makes it so much fun to watch!”

But when Britain Dawson answered my question, he just said, “Bad,” and then continued to say later after more questioning, “Too much cheese factor. The conflicts that the protagonists faced were too easily defeated, and the grand chorus choir singing was ’high school musical-esc.’” 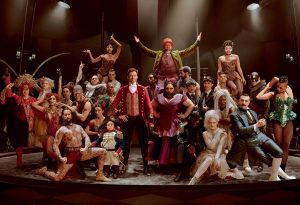 the same views on the film. I also asked Jaci Wise how she felt about the P.T. Barnum story and she says, “I love musicals, especially Broadway shows. This movie felt like a Broadway show brought to the screen.” And when I asked more about her feelings on it she said, “I loved the whole thing! But again, I am a huge Broadway fan, which is what this movie basically felt like to me. I personally loved the song ‘The Other Side.’ Was I dancing in my seat when I saw it the first time? Absolutely. Did I cry multiple times during the movie both times seeing it? You bet. Have I since danced around my house listening to the album on repeat? That is correct.”

Overall the general public including myself seemed to enjoy the film greatly, with some exceptions undoubtedly. So if you are thinking about going to see this film but just need to hear from others to see if it is worth your money, you now have recommendations from three of the four people interviewed in this article. Jaci would suggest it to everyone, Britain Dawson does not recommend it, and Kenedy says, “If you enjoy musicals you will really like it, and if you enjoy watching grand performances. If you are one of those people that don’t like musicals and are a very analytical movie watcher and you pay close attention to the storyline, you probably won’t like it.”