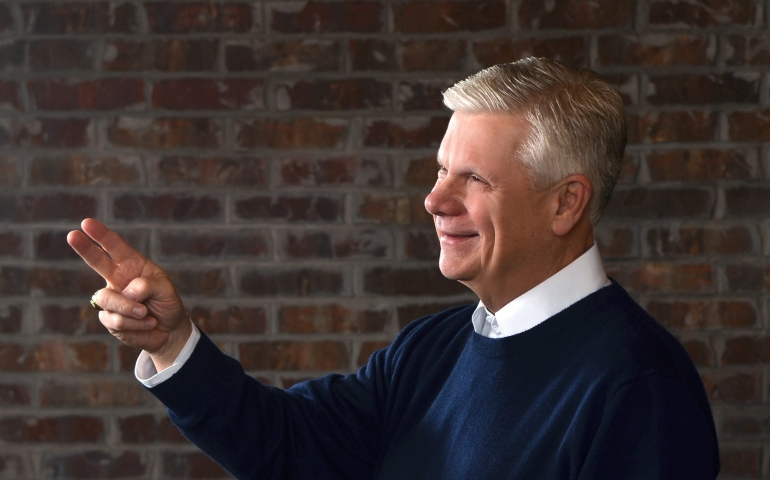 Dr. Stan Toler (1950-2017) was one of the most prominent voices in the Church of the Nazarene. Serving as a pastor and General Superintendent in the Church, he is most widely known for his career as an author, merging his life of faith with his knowledge of leadership by publishing over 100 books throughout his career. He not only influenced other’s lives through his words, he influenced others through his posture of faithfulness and devotion.

Born in the small town of Welch, West Virginia, Dr. Toler grew up surrounded by poverty. His father died when he was 11 years old, sharing in chapel at Southern Nazarene University (SNU) that this event caused him to turn towards negativity. It was his freshman year of college that he decided to surrender all to God, never looking back from that moment on.

Throughout his career, he continuously sought to mentor the next generation of Nazarene pastors. Called into ministry at a young age, Dr. Toler preached approximately 15,000 sermons to over 200 denominations in all 50 states and 80 different countries. In his more recent years, Dr. Toler pursued his passion for non-profit ministry through his foundation, Toler Leadership International, attempting train the next generation of young, Christian leaders.

One of the many people Dr. Toler influenced was Jon Middendorf, head pastor at Oklahoma City First Church of the Nazarene. Middendorf explained the role Dr. Toler played in his life, saying, “Stan, in 1990, when I had no idea what I was going to do after graduating, saw something in me that I didn’t see in myself,” he proclaimed. “He asked me to be his part-time youth pastor… I needed a job, so I accepted, and I was able to work with him and get established at OKC First.”

Middendorf examined the impact Dr. Toler made on his life, saying, “Stan never forgot a name, because Stan was genuinely interested in people and their stories. Once he locked into your name, not only did he never forget your name, you were more than likely going to get a card for Christmas and your birthday. He learned lives and collected them as friends… I don’t know of anybody who would identify as the enemy of Stan Toler because he was so lovable and loving.”

Blair Spindle, Chaplain at SNU, was impacted similarly to Middendorf, saying, “I first met Stan when he became interim pastor at Trinity Nazarene in 1996. He was instrumental in connecting me with the church in Venice, Florida where I served, and later he called me back to Trinity to be part of his pastoral team.” Through the lives of Spindle and Middendorf, we can see a small portion of the immense impact he created on the lives of those surrounded by him.

“This was a time in my life where I had become disenchanted with the church and with leaders. His investment in me and confidence in my ability to lead really began to restore me in so many ways,” Spindle stated. Spindle’s story is not uncommon for those who knew Dr. Toler. The words written in each of his books attempts to affect people in the ways he affected Spindle and Middendorf. His dedication to ministry was a testament to the hope found in the Resurrection.

When asked to explain Dr. Toler in one word, Middendorf used the word “faithfulness” and Spindle used the words, “purposeful,” “generous” and “kind.” These words, along with many others, are evidence of Dr. Toler’s embodiment of hospitality and excellence in the Church of the Nazarene. Although his presence will be greatly missed, his legacy will be passed along through those he mentored, pastors like Middendorf and Spindle.

Let these words of Dr. Toler be an embodiment of his legacy and impact on the campus of SNU: “A positive mental attitude without a positive faith will result in a positive failure.”