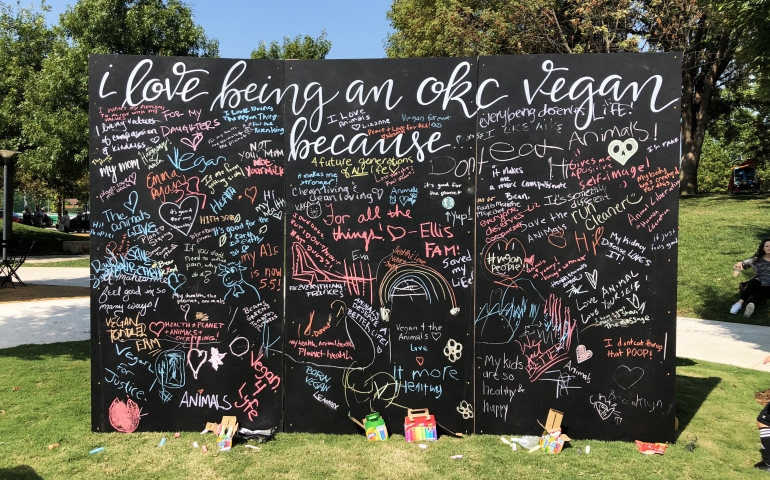 This past week, the Myriad Gardens hosted a slew of people who were excited to finally have a festival just for them. Health supplements, chiropractic demonstrations, yoga and vegan food trucks dominate the scene. The reason for all of this being VegFest OKC.

VegFest celebrated its second annual year this weekend in Oklahoma City. It lasted all day and was very fortunate in terms of attendance. This was probably in part because of the variety of things to do and the amount of food available. There wasn’t just any kind of food at the festival–it was delicious vegan food.

Vendors lined the street and boasted their plant-powered menus for people to get in line to devour. Food trucks such as Holey Rollers, Junction Coffee and CocoNutz boasted coffee and sweets, all of the vegan variety. 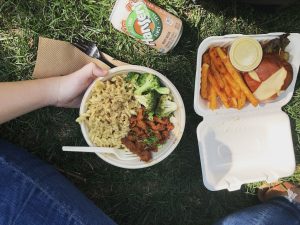 Plato’s Provisions Co., The Taco Plant and The Loaded Bowl all graced the scene as well. At Plato’s, customers could order a fried chxn sandwich with potato salad, all vegan of course. A crowd favorite, based on the long line, was The Loaded Bowl.

One of the most popular dishes here is the Down Home Bowl, featuring cashew mac & cheese with chopped “bbq” and grilled veggies–a perfect dish for a restaurant boasting conscious comfort food.

Along the Myriad Garden, vendors ranged from Cult Kombucha Co, Natural Grocers, and Plant, to Salt & Water and many others. People visited the booth not only to buy products but also to learn some information about vegetable-based diets. Action For Animals gave out brochures talking about promoting a plant-based lifestyle for animal benefits, and Fertile Ground Cooperative gave information on composting and their services.

SNU senior, Emma Schultheis attended the fair and commented, “I’m not vegan or vegetarian but I am interested in a lot of things that this festival was about! Healthy living, sustainability and community are all things that I am a supporter of, and those things were really embodied in this festival.”

Oklahoma is among the states that have the least amount of vegan restaurants–174 compared to a state like Oregon that has 964. But as we saw from the festival, there are many different reasons for being vegan, whether it be for environmental reasons or for ethical reasons.

One of the most important elements of VegFest was the community perspective. Emma mentioned, “It is exciting to see OKC come together as this smaller community. I definitely recommend going to community events here in OKC! Even if just for the food–which is incredible by the way–it’s worth the experience.”

There are several people here on campus who are vegan as well! Be aware and go around OKC attending some of these great events. Don’t be afraid to start conversations and think about a plant-based lifestyle as well. Who knows, maybe you will like it.