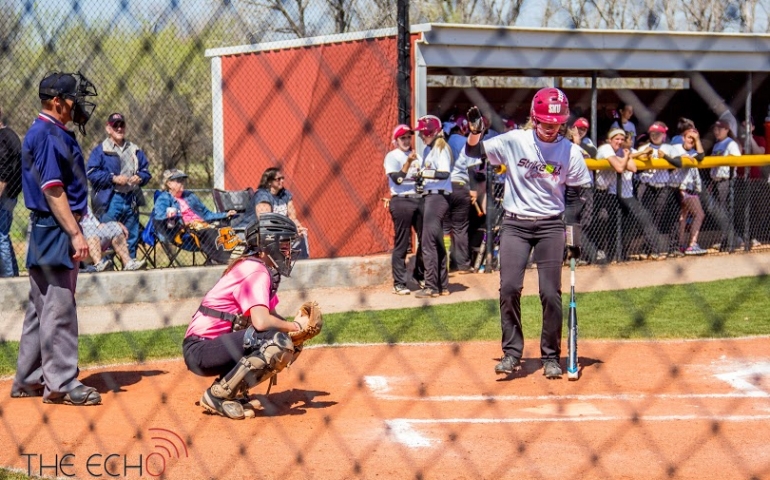 For the softball players at SNU, their walk-up songs are not simply the routine way of introducing themselves. Every year, the softball women choose a song to literally “walk up” to the plate to for their turn at bat.  To find out the scoop on how a song gets chosen and what the song signifies, I interviewed a couple of players.

“My walk-up song is “Chainsaw” by Family Force 5,” said Sam Smith, sophomore. “Even though it doesn’t really have a meaning, I love the beat of the song.”

Smith, an outfielder who started 20 of the 22 games she played in as a freshman, doesn’t appreciate the song just for the music, however.

“We have a softball saying that encourages us to ‘Crank that ball,’ which means to hit it really hard,” said Smith. “One of the main lyrics of the song are ‘Crank it like a chainsaw;’ it motivates me to hit the ball like our motto tells us to.”

Allie Baird, a sophomore catcher with a six-game hitting streak at the end of last year, gave me insight on the purpose of a walk-up song.

“I think the reason we have walk-up songs is to help get us focused and relaxed for our turn at bat,” said Baird. “The song I walk to the plate to is “Highway to the Danger Zone” by Kenny Loggins. It is a running gag from a TV show my boyfriend and I like to watch, and that song helps me laugh and relax before I step in the batter’s box.”

If the players get tired of hearing the song over the course of the season, they have the choice of changing it the following year.

“I had a different walk-up song last year, but “Chainsaw” is my favorite,” said Smith. “It really gets me pumped before I step into the batter’s box.”

While the majority of players will change their song from year to year, some choose to keep theirs for various reasons.

“I would like to use the same one next year,” said Smith. “It’s simply a fun dance song.”

The walk-up song is not just about revealing the players’ preferences or giving them inspiration to play their best, however. It can also be about remembering those who have mentored or inspired them along the way.

“Last year, my song was “Free” by Lecrae,” said Baird. “I used it in honor of my youth pastor who passed away that summer.”

To hear the players’ walk-up songs and see them in action, check the softball schedule at www.snuathletics.com and attend one of their games.

[author image=”https://drive.google.com/thumbnail?id=0BzUPfa-vNtHwN2RXSGN1NDRxYjA&authuser=0&v=1409347068124&sz=w1248-h559″ ]Summer Howard, Guest Contributor
Summer is a sophomore English Education major and Christian romance author from Yukon, Oklahoma. Her first book, No Matter What, was published in September of last year. She is currently working on her next book while attending Southern Nazarene University. [/author]