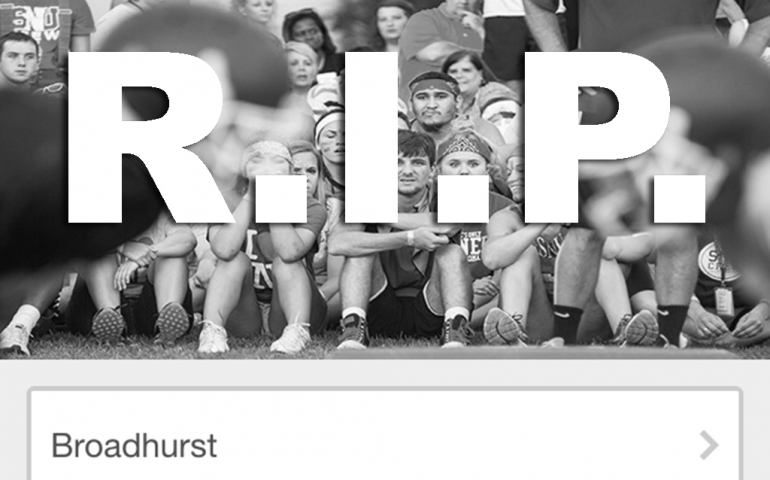 The official Southern Nazarene University smartphone app is as dead as a doornail. While the exact date of death is unknown, it is no longer available in smartphone app stores. Along with that, information within in the app will no longer be updated in any way.

According to Marian Redwine, SNU’s Associate Dean for Student Life, the app was put to rest due to a lack of student usage. “More than half of the number of enrolled students downloaded the app,” said Redwine. “But when our analytics came back for usage, we hardly had any.” Because the app required monthly maintenance fees to keep live, the Student Life department decided to not renew their contract with the program’s developer.

Looking back, SNU’s Student Life department began working on bringing the app to students in early 2013. An outside developer was contacted and worked on building the framework while the school provided all the data that would populate the app’s various categories. Finally, in August of 2013, the app went live.

It wasn’t until January of 2014 that the school began heavily pushing students to use the program. Many platforms were used to advertise the app, including Facebook, Instagram, the Storm Forecast and chapel announcements. Redwine said that she was using every means of promotion she could think of to get students on board with the SNU app.

However, despite about half of the enrolled students downloading the program, analytics showed that users just weren’t returning. Instead, it seemed that students prefered to get their information elsewhere.

Along with that, SNU Life text messages stopped in favor of notifications from the app. While the notifications hoped to draw students back into the app to see information about specific events and promotions, it resulted in students being less informed about what was happening around campus. “[It] dramatically affected ticket sales,” said Redwine. “It affected attendance at things and affected people knowing about changes.”

Today, the SNU app is gone from app stores. However, despite the loss of the program, there aren’t any holes left unfilled by its absence. For instance, the SNU Life text messaging program is active again. Along with that, Student Development has begun using a new analytics software called “Check I’m Here,” which they hope will bring the school better data as to what kinds of students attend events and how they can better serve the student community.

Like a phoenix rising from the ashes, Student Development wishes to continue serving the Southern Nazarene University community through the best of their ability. While an official app may have not been something that the students utilized, it was a step towards SNU better understanding how to engage students and create a stronger community.