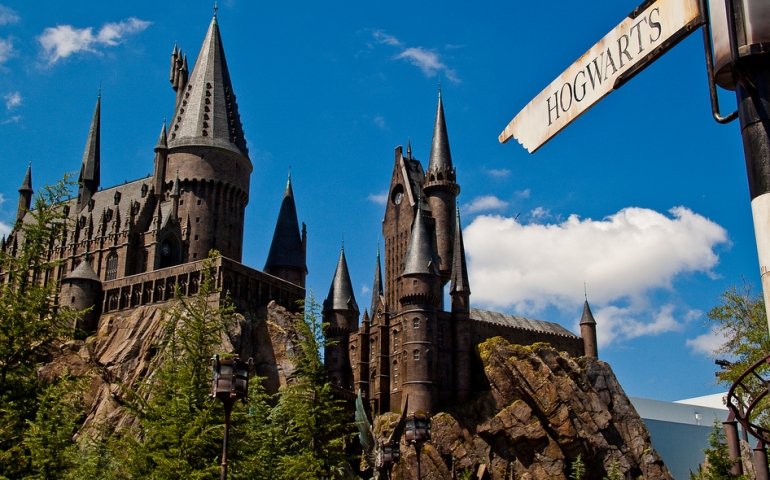 (Disclaimer: I do not own any rights of the Harry Potter world. All credit goes to the amazing J.K Rowling. Please do not sue me)

How about Quidditch, the Yule Ball and OWLs?

Have you ever wondered what Southern Nazarene University would be like if it magically turned into Hogwarts? Is it just me? Well, if you have or have not thought about it, or if you’re not familiar with the Harry Potter series by J.K Rowling at all, keep reading anyways! I am about to let you in on what it would be like if SNU was actually Hogwarts.

First things first. In the beginning of the school year, we spend hundreds, if not thousands of dollars on our textbooks, some of which we do not even use in class! Imagine if instead of spending $400 dollars on the complete set of the Norton Anthology, we can spend our knuts, sickles and galleons on more riveting schoolbooks such as Fantastic Beasts and Where to Find Them by Newt Scamander and History of Magic by Bathilda Bagshot. I know that when I’m shopping for supplies for school, I start to feel a little bored when I’m filling my cart at Walmart with notebooks, pens and binders. Often, I just can’t wait to get the school shopping over with. How exciting would it be if instead of buying college-ruled paper and journals, we had to buy our own wizarding robes, quills, parchment and, most importantly, our own wands?

It is most likely that the Sodexo workers would be house elves, the Shoe Tree would be the Whomping Willow (which would whomp students with shoes, of course), homework and moodle would be the equivalent of dementors and the Chamber of Secrets would be located in the dark, mildewy basement of Herrick.

Now, if you’re a Potterhead, you would know that one of the most important parts of being a Hogwarts student is knowing what house you belong in.  If SNU was Hogwarts, I believe that the the sorting hat would place you in Gryffindor, Ravenclaw, Hufflepuff or Slytherin according to your major. To figure out exactly what major would be considered what house, I asked a couple fellow juniors (i.e. third-year) students for their opinions: Amy Calfy (Ravenclaw) and Aaron Taylor (Hufflepuff).

“I feel that Ministry Majors would most likely be housed in Hufflepuff,” said Taylor.

Calfy agreed, “Yes, ideally, I think that most Ministry and Theology majors should have Hufflepuff qualities.”

What about Business majors and Bio-Chem majors?

“Slytherin,” said Taylor, “because they have to be both ambitious and cunning in order to stick with their careers.”

Who are the Gryffindors of Southern Nazarene University?

“Anyone with a Fine Arts major, because Gryffindors are expressive and live life to the fullest. A lot of Music and Theatre majors do the same,” said Taylor.

Finally, Calfy was certain she knew who the Ravenclaws are.

Have you ever looked at one of your professors and thought to yourself, “Wow, my professor reminds me a lot of Professor Snape”? I know that I have. Some of our professors here at SNU certainly remind me of Hogwarts professors. So, if SNU really was Hogwarts, I would think Dr. Lewis would make a great Professor McGonagall with her stern but fair style of teaching and obvious care for students. Again, students offered their opinions about who our professors would be if SNU was Hogwarts:

“I definitely think that Prof. Wilcox would be Professor Trelawney,” said Calfy.

When I asked why, she replied: “He’s pretty crazy. Just like Trelawney.”

And who would be the “Dumbledore” of our school?

“Loren Gresham. He’s the president, so he has to be Dumbledore,” said Calfy.

Taylor disagreed. “No, I think he would be the Minister of Magic.”

Though I highly doubt Southern Nazarene University would ever become a school of witchcraft and wizardry like Hogwarts, it’s pretty fun to imagine, “what if?”

[author image=”http://echo.snu.edu/wp-content/uploads/2014/09/Celeste-Forrest-Bio-Pic.jpg” ]Celeste Forrest, Staff Contributor
Celeste is an English Education major with a passion for writing. She dreams of becoming a high-school English teacher and author. She enjoys sleeping, reading while its raining, spending time with her amazing friends, and drinking Puerto Rican coffee. [/author]