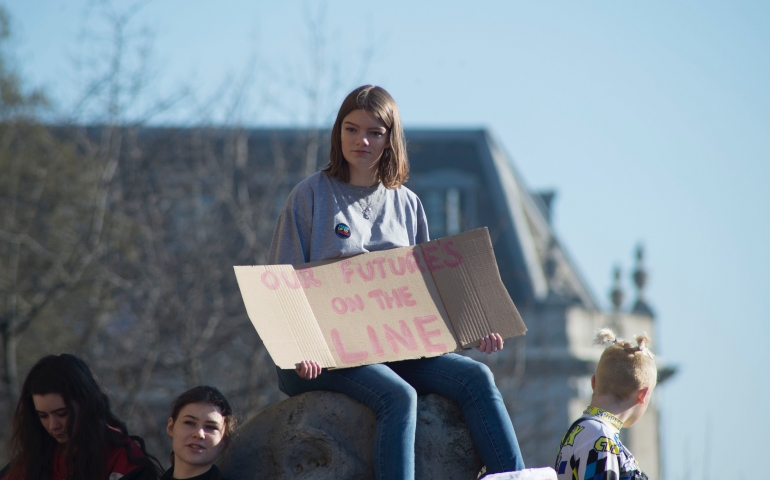 The youth of the UK are setting an example for the world by taking a stand against the ongoing environmental abuse that has increasingly plagued our planet.  Thousands of high school students have been gathering in the streets across the UK for the past few weeks to protest the current lack of government support for ecological problems like climate change.

With these mass protests, young people are showing that they do have a voice, forcing people to listen. Students at Southern Nazarene University (SNU) are matching the passion of these high schoolers and are in full support of their cause.

While climate change action is the main cause of their protest, the students are calling on the government for specific changes like declaring a climate emergency, making environmental education a requirement in school curriculum, and lowering the legal voting age to 16.

The most common point that SNU students and faculty agreed with was to make environmental education a priority in U.S. classrooms.  Environmental science major Jacob Grimm spoke very passionately about this matter saying, “It’s appalling that ecological education isn’t mandatory.” He continued by saying that “our education system is lacking so much that millions of people don’t even believe in climate change or scientific evidence as a whole. When did our education become so bad that we stopped believing in factual evidence?”

On the point of changing the legal voting age to 16, the UK students are wanting government leaders to recognize that younger generations have a greater stake in the future of our world and its ecological state.  Biology professor Dr. David Hoekman said he understands the anger many young people feel when it comes to environmental issues, saying, “Their (your) generation will pay a much higher cost due to our current recklessness and delay in addressing the problems we’ve been creating.”

Although some students had mixed opinions on lowering the voting age, many students and faculty agreed that the U.S. government is not doing enough to participate in the solution of the ecological problems ailing our planet and that Americans need to start taking a stand the way the young people of the UK are right now.

Grimm, who is in full support of the protests, said, “If we don’t show that we care about something, politicians will never listen to us.”

Senior Kaitlyn Metcalfe, who is a small group leader for a group discussing environmental stewardship, also believes in taking on a more active role, saying, “We have to do more and can’t put it off any longer… We must acknowledge how much better we are when we work together and recognize that it requires all of us to participate in the restoration of land and life.”

Even if our national government isn’t participating in the global efforts against environmental harm, it does not mean local leaders can’t start the movement towards change. Hoekman emphasized this point, saying, “This does not mean that state or local governments need to wait for change. U.S. citizens can advocate for policies they agree with and action can be taken at the state or local level before we’re ready to act at the national scale.”

The UK protests are proving that there are a growing number of individuals ready and willing to make a change for the betterment of our planet.  Environmental care will no doubt continue to be a controversial topic- but as long as the conversation is still going and groups like the UK students are speaking out, people will continue to have hope for the future.

(Photo by Josh Barwick on Unsplash)