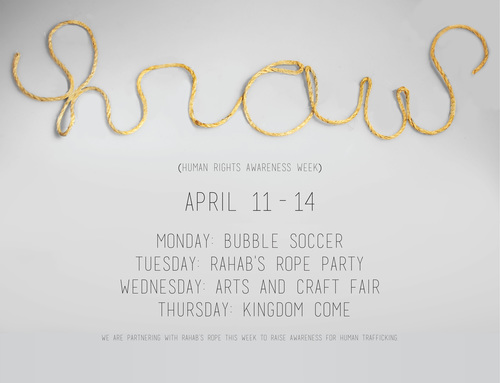 Every year the Student Government Association (SGA) chooses a cause to focus on, with that focus culminating in Human Rights Awareness Week (HRAW). HRAW is a week on campus where the students, faculty and staff can take the time to gain information on and contribute to helping end tragedies that are affecting the world. This year, SGA is partnering with the SNU Speak Theme House, from April 11 to April 14, to end human trafficking.

This year’s fundraising will benefit Rahab’s Rope, a nonprofit organization that is dedicated to helping women and girls in India that have been forced into the commercial sex trade. The organization’s name is based on the story of Rahab, a prostitute found in the book of Joshua. Rahab hid two spies sent by the Israelites to Jericho, and for putting her family at risk, God spared Rahab and her family during the destruction of Jericho. On the instruction of the Israelites, Rahab hung a scarlet rope outside her window as a sign, and her family was spared.

Human Rights Awareness week will kick off this Monday with a bubble soccer tournament. The cost to enter is $2 and individuals or teams can sign up at snusga.com.

On Tuesday, a Rahab’s rope party will be held. The party will be hosted by senior Celeste Forrest-Blissett. Forrest-Blissett will be talking about the realities of human trafficking, and ways students can help. In addition to teaching students how they can throw their own Rahab’s Rope parties, there will be craft items for sale, some of which have been handcrafted by those that are being helped by the Rahab’s Rope’s ministries.

There will be an arts and crafts fair on Wednesday, at which attendees can make their own Rahab’s Rope in the form of a red hemp bracelet. According to Forrest-Blissett, the bracelet is to “remind us that the same way Rahab’s rope was a symbol of Rahab’s spiritual and physical liberation, we, as Christians, are called to help physically and spiritually liberate those who are oppressed by any form of slavery.” HRAW will culminate Thursday at Kingdom Come.

Joel Prentice, Freshman Representative of Campus Ministries, hopes that even though HRAW participants are playing games, that they will take away more than just a good time, but also take away the seriousness and gravity of the situation of human trafficking. Prentice went on to say, “Prayer and petition aren’t the only things that we can do. There are opportunities to get involved, there are opportunities for us to set aside some of our own time, to give to those people in need… a single grain of rice can tip the scale.”

Information on human trafficking, and how you can help, can be found at rahabsrope.com. For information on the times, prices and locations of HRAW events, visit snusga.com.