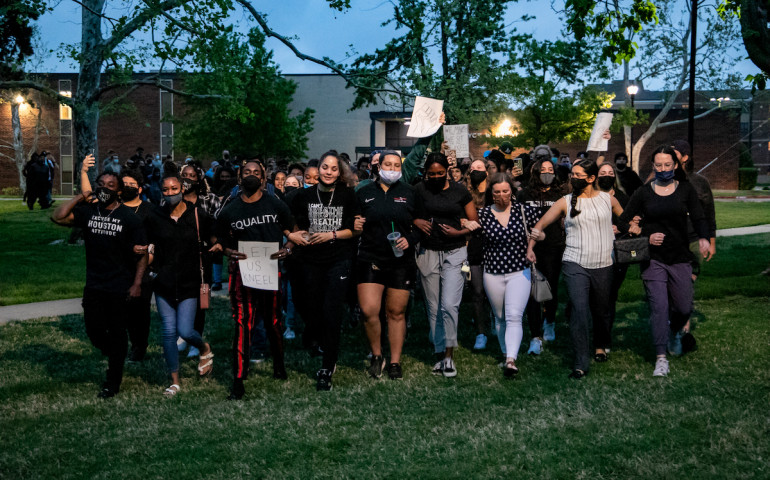 During a home game against East Central and again during a home game against Harding, Southern Nazarene University women’s soccer team took a knee while the national anthem played. “We knelt because we want to show our support for the racial injustices that have been happening over the past months. We believe we have a platform, and we wanted to use this platform to show that we stand for unity,” Ashlee Ray, a junior on the SNU women’s soccer team says. “As a black woman in our society today I have experienced racial injustice and it’s heartbreaking. It affects the way you perceive the world and the way you go about life in general,” says Ray.

Although the women’s soccer team hasn’t faced consequences, they have had multiple meetings with administration. Ray expressed that a few players have felt silenced since and personally feels that they are having their voices and choice taken away from them. “I believe that everyone has a choice as well as a right to their opinion. We don’t all have to agree, but we should all respect each other,” Ray explains.

On April 23, 2021, Dajia Davis, president of BSS at SNU, called for a meeting of students and started a petition on change.org about a potential policy that could be put into place about kneeling during the national anthem, an action Dr. Newman, president of SNU, calls “divisive.” The initial goal of the petition was to reach 100 signatures, and it has surpassed that with over 700 signatures. Davis says, “there is no current policy in place that prohibits a student from protesting and it needs to stay that way. There is power in numbers, and we must prove that we have those numbers and will not rest until our voices are heard.”

On Wednesday, April 28th, 2021 at 8:30 pm in Herrick Auditorium, a meeting was held with Dr. Newman to discuss the potential policy that could be put into place about kneeling. With a diverse crowd of only students around 200, Newman started the meeting with scripture and then two testimony videos. One with Scott Stearman and one with Dre Murray, a former student who is a POC himself. Early in the meeting, Newman expressed that when he was in the recruiting processes for SNU, he “wanted to celebrate diversity and be a place of inclusion.”

When the topic of kneeling during the national anthem was addressed, Newman stated that he had no new policy to announce to SNU students and mentioned that the soccer girls that decided to kneel have been faced with no disciplinary action. He followed this by saying “my desire as president is to find ways to unite us, to unite our community. The last 48 hours have provided lots of proof about how much the question of kneeling during the national anthem evokes opinions that separate our community.” Newman also mentioned how kneeling could cause donors and alumni to withdraw their financial support from the university. He then opened the floor to students with questions.

At this point in the conversation, many emotions were high and students were upset with statements Newman had made. Chaya Crittenden asked the question “What is so divisive about us kneeling during an anthem?” Newman responded with the statement, “It’s reflected in the messages our offices have received- that I’ve received personally. People have said if you allow students to kneel or if you don’t allow students to kneel, we are going to withhold our financial support.”

The conversation in Herrick Auditorium quickly shifted from whether or not there would be a policy prohibiting kneeling to questioning if the university itself was going to stand with their donating alumni or their students.

Newman did, however, propose an alternative to kneeling to the national anthem that would consist of team captains asking players from the opposing school if they wanted to join in a prayer circle, where they would kneel as they prayed for the “big concerns about what’s going on in our country” and announce from the PA system what they are doing and what they are praying for. Athletes would then stand for the national anthem.

Many students still had questions for Newman and comments to make. Keith Breckenridge, a graduate student at SNU who is an alumnus of SNU’s undergraduate program, spoke at the mic where he told Newman that he knew plenty of other alumni who were not satisfied with what was being said and done. When referring to a Facebook group that is not happy with the action of kneeling, Breckenridge said “They think SNU is liberal and that all of a sudden we are losing our Christian values. If they think SNU is liberal, I hate to see what conservatism looks like from that angle.”

Students and Newman continued to go back and forth. With students saying SNU only cares about getting “confederate money” while Newman continued to assure students that both he and the institution care for them. “I think what this discussion tonight has really illustrated is maybe what I’ve tried to say but said really poorly, which is that we got big issues,” Newman said. Many students reported leaving the meeting unsatisfied and with many questions still unanswered.

I reached out to Newman and he had this response from the meeting. “The wellbeing of students of color on this campus is of tremendous importance and I am thankful for the ability to listen Wednesday night to the array of impassioned and courageous voices. It was obvious that there was deep pain in the room and I appreciate the vulnerability so many displayed. The Cabinet listened carefully and closely. As to the specific issue of SNU athletes kneeling for the National Anthem, we will continue the dialogue with SNU’s constituencies, including our Board of Trustees. Our desire is to find a resolution that honors our mission and values while seeking ways to unite our community.”