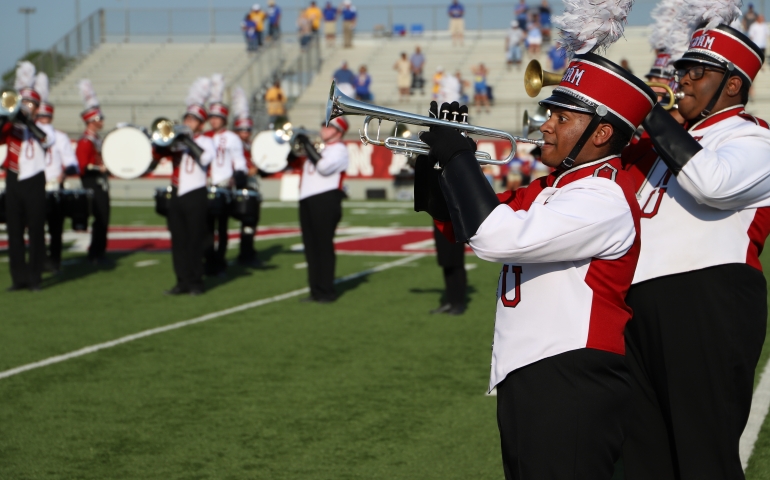 The band has also welcomed Jordan Macias and Spencer Jornod as this year’s 2019 drum majors. Macias explains, “The reason I wanted to be a drum major is to help people grow in the Marching Band. I also wanted us to become a better program than we have been in the years past– being a drum major was one of the best ways to do it by spreading my knowledge as a music ed. major over to the band as well.”

This past summer, the Sound of the Storm has been developing new techniques this year by learning the basic fundamentals of marching while also learning new music for drills and the show. As the drum majors are using a new conducting techniques, many of our fellow students have been working very hard with new instruments they have never played before.

This year, the 2019 Sound of the Storm has welcomed Ricky Spears as the new band director. Spears is also currently the Jazz Band director while also giving trumpet lessons to many of his students. Ever since 1994, Spears has many experiences with music and is still living his dream today. Spears expresses, “I always wanted to be a band director.”

The Sound of the storm presents Latin Nights featuring: Recitar… Vesti La Giubba, A Ballad called Diego’s Goodbye and Malaguena. These compositions expand in many different genre styles such as classical, a movie soundtrack from The Legend of Zorro and even to Latin jazz.

All in all, The Sound of the Storm has definitely changed from past years, and the fans are now ready to hear what the Storm has in store for them.