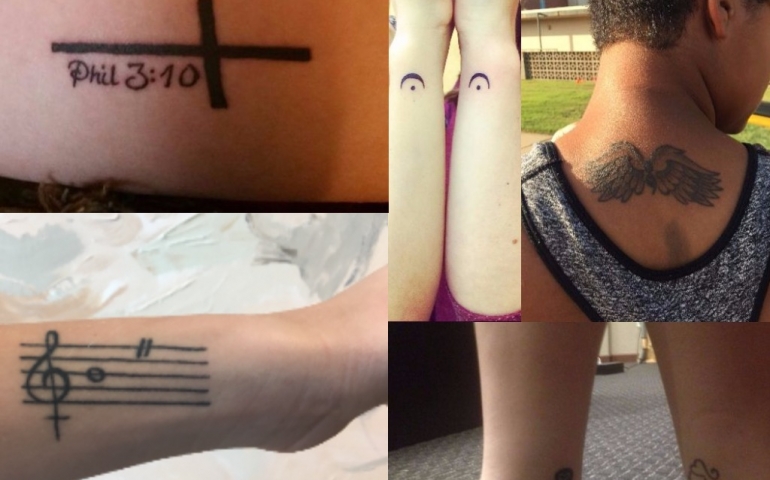 Tattoos have been taboo in the Christian community but are progressively moving toward an accepting nature. As you walk through campus, it is hard not to notice that a multitude of students have adorned themselves with tattoos.

While they can be a daily reminder of various moments, many students at SNU use them to model what their faith is or what they wish it to be. Many tattoos are Christ-centered reminding people of the relationship they have with Christ. Caleb Rose says “I had always wanted a cross and the verse I got explains my faith as best as I could find.”

Autumn Harrison’s tattoo is a B note on a treble clef which doubles as a cross with a conducted rest called a caesura. She says, “It is based off the bible verse Psalms 46:10 which reminds me to be still until God tells me not to be. I chose a whole note because if I don’t ever stop and rest, then I won’t ever be made whole.” Lastly, to add more meaning to the treble clef made into a cross, Autumn uses another Bible verse, John 16:33, “In this world you will have trouble. But take heart! I have overcome the world.”

A constant reminder of following God is something many people wish they could have. Christianity is not always the easiest path to take, and Ashley Meyer’s tattoo reminds her to always say yes to God’s plan and will for her life. The design also includes a period, and she says it is there to “say yes no matter what.”

Ben Klippert’s tattoos (not pictured) are some of the most obvious on campus. With three decorating his right arm, he’s hard to miss. His first was the wolf on his inner bicep. He says “It coincided with me choosing to go into ministry and coming out of the struggles I was having at the time involving substance abuse. God brought passions and desires into my life; the wolf is using those passions and desires to carry God’s kingdom, which is why it’s carrying a rosary.” All his tattoos involve a teaching God has for him. When asked about his future tattoos plans he scoffed and said “Man I plan to get my whole body done.”

The most important people in one’s life often are their family. Abbey Roxby has two ankle tattoos representing her great grandparents “…because I’m all about family and love”. Her great-grandpa’s last words to her were “You’re beautiful, I’ll always love you owlet.” These words became the reason to get an owl representing him. The elephant shows her great-grandma’s love for elephants; she was an army nurse and every place she visited she would get an elephant figurine. Abbey continued this tradition on her SIMS trip this past summer.

Alyssa Flesher and her sister are both musically talented and are close to each other. Alyssa says “The tattoo on my wrist is a fermata which is a musical symbol meaning ‘to hold.’ We wanted to get a sister tattoo that represented our love for music as well so we got fermatas on our wrists to signify that we will hold each other in our hearts forever.”

Megan Brown’s tattoo is a tribute to her brother who committed suicide about a year and a half ago. “I got the semicolon for suicide awareness. It’s used in a sentence when you could have finished the sentence but you don’t. So it’s kind of a continue on type of thing. The wings are some that I drew from a dream that my sister had in a dream about him.”

Many people on campus hope that tattoos will become more commonplace in the future. They aren’t just for people in the army or punks with a million piercings to compliment their tattoos. They are pieces of art representing what matters to the people adorning them.