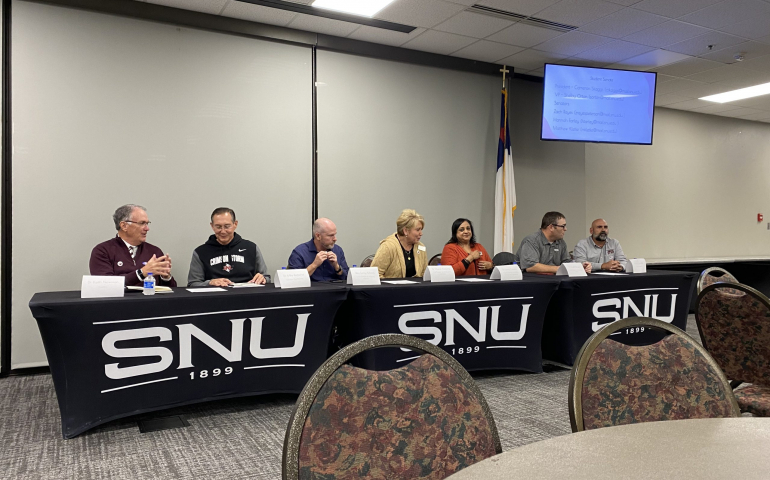 On Tuesday evening, the student senate partnered with the administrative cabinet in order to host Southern Nazarene University’s first ever Town Hall. The Town Hall sought to be a dialogue between students and administrators, allowing for questions that had been submitted by students ahead of time to be addressed. The panel of administrators were given the opportunity to answer the question for five minutes, before it then opened to the floor for further discussion, questions, and comments.

The event began with the administrative cabinet introducing both themselves and the areas of the campus that they were responsible for. All members of the cabinet were there except for Provost Dr. Tim Eades, who was sick at the time of the event. Campus Pastor Dr. Blair Spindle, while not officially a part of the administrative cabinet, was able to attend the panel in addition to Dr. Keith Newman, Dr. Michael Redwine, Dr. Scott Strawn, Dr. Marian Redwine, Dr. Lena Crouso, and Rev. Larry Morris. Their official titles and job descriptions are listed on the administrative page of SNU’s website.

The evening was hosted by Student Body President Cameron Skaggs and Student Body Vice President Shelby Orton, and lasted for approximately an hour. In that time, the panel was only able to get through two questions, but did manage to answer a variety of follow up questions.

Questions were amalgamations of submitted questions phrased in such a way as to cover as much information as possible. The first question at Town Hall, presented by Orton, asked, “What are the ways SNU is working to promote the safety of women on campus, both physically and emotionally?”

Dr. Strawn, Vice President for Business and Finance who also oversees campus security, was the first to address this question, as he had to leave the event early. “About a year ago the institution did make the decision, because of some issues related to our concern around the city of Bethany’s ability to deliver public safety services to us, to go ahead and, under the Oklahoma Campus Safety Act, take the step from campus safety to public safety,” said Dr. Strawn.

Dr. Strawn continued to explain that this allowed SNU to hire police officers with “full legal power within the campus boundaries,” allowing for students to have more immediate access to police assistance.

“Public safety obviously has a role to play in [women’s safety],” said Dr. Strawn. “One of the items that always gets brought up is this concern about reporting. Am I able to report anonymously? Is it gonna be safe for me to report? Is there going to be someone who takes my report that I can feel comfortable with and safe with? Will the institution in any way retaliate against me? Will the person I make a report on have this information and retaliate against me? These are all obviously really important considerations. We really want a culture of openness and respect for one another where sexual or workplace harassment…is not acceptable behavior, and part of that requires for you all to feel safe to report.”

Students have many options when reporting on harassment or assault. Student life, Renew Counseling, and faculty members are all good starting points for students seeking help in the process of reporting, though they do not encompass the whole scope of what SNU hopes to offer survivors. One tool that has been implemented this year is Work Shield, which serves as a third-party investigative body to which students can report instances of harassment, violence, and assault. The hope in implementing Work Shield is that it will enable students to report without the fear of institutional bias or retaliation.

One such fear students have in reporting sexual violence on campus was voiced within an audience question, in which a student asked whether or not students would be punished for reporting an instance of assault that occurred under circumstances inconsistent with the lifestyle covenant, such as a party. Dr. Redwine, Executive Vice President and Title IX coordinator, had a very straightforward answer to this concern.

“The answer is no,” said Dr. Redwine. “Coming forward is the right thing. We get to spend this short amount of time together, your four years or however long it may be. Part of what we believe is that there are ways of living that are healthy ways to live. So, if you will, think of it this way–we get to coach you for just a little bit, and then you’ll make your own decisions as soon as you leave. While you’re here, we want to coach people into the right behavior, but we don’t want to make it so punitive. That’s not the goal.”

As a follow up, another student asked what preventative measures were being taken on campus in regards to assault and harassment, as opposed to a singular focus on repercussions.

“One of the things that we’ve done is that all students are required to go through the SAFE Act training,” Dr. Redwine continued. “Is that foolproof? No, but it is a step so that we know that everyone understands what it is and that no means no. Everyone knowing that there is [an accessible] mechanism for reporting can hopefully be a way to prevent. Another thing that’s kind of an interesting one, and might sound light-hearted but I don’t mean it that way…there is a self-defense class, actually called Karate I and II. While I would hate for that to ever be needed in that way, I think that might be another way.”

“I think that with the systems and structures in place, we also want to think about the culture we want to create. And I think that needs to come from a collaboration–Christian Formation and the work of ILE. What it means to find honor and this understanding of the sanctity of the human being,” said Dr. Crouso, the Vice President for Intercultural Learning and Engagement.

Dr. Crouso advocated that students ought to voice their opinions and share the ways in which they believe preventative measures against sexual harassment and assault could be used. “I do think that it’s good to start talking about what you all believe would help with the prevention. We’re living in generational shifts. If I were thinking about this 40 plus years ago, the kinds of things we would be talking about to protect women would sound different. And so you all as women, and the men, need to start thinking about what that means for our community and how to prepare for prevention.”

The second question addressed at the Town Hall was, presented by Skaggs, was based on quite a few concerns submitted by students. “A lot of our student body seems really stressed right now and doesn’t know exactly what to do about that. What is your plan for improving student life experience through activities that can relieve stress?”

Dr. Spindle, in response, revealed a project that SNU is beginning to work on called the Crimson Corner. “[We are] looking to find spaces that students can go to and just be,” said Dr. Spindle. One of these ideas we had was to create a patio space outside of the Commons.” The current vision for the patio area is to place it near the fire-pit, resurrecting it for the sake of student use in addition to adding tables, pergolas with hammock hooks, a stage, and outdoor games. The vision is to be a recreational space for students, where students could relieve stress in the future.

“When I say that this is a plan we have, it’s a plan that we’re really working towards,” said Dr. Spindle. “It’s not just a dream. We are strategizing to make it real.”

“If you have ideas, please let Blair know,” said Dr. Redwine. Prompted by a follow up question, the cabinet revealed their hopes that this project would be completed by the fall of 2023, and that plans and financial discussions are already underway.

Dr. Redwine also discussed materials given out at the Be Your Best You Fair, highlighting ways to reduce stress such as meditation, journaling, exercise, and time spent outdoors. He then suggested that students begin a dialogue so that the administration might be able to know what kinds of stress-relief activities students would like to have available to them.

Students in the audience raised a few follow up questions about mental health and what resources and advice they would have for students who have found themselves overwhelmed and depressed.

“I think part of that stress reliever is to get in touch with what you are actually feeling,” said Dr. Crouso. “One of the things that I would like to urge students to think about is–what [are] the wellness support systems that Renew Counseling can bring? Often times we think counseling is inherently about therapy and mental health, and we overextend the definition. But when you’re stressed, it does start to trickle into different areas and it does begin to be about depression and other aspects of your emotions. I think that we need to tap into some of the things that are already set up.”

Dr. Crouso also brought attention to the groups that Renew Counseling offers in which they discuss different aspects of wellbeing important to college students. She suggested that the administration did need to do a better job of letting students know about the resources available to them, and suggested the Navigate app as a good place to begin getting that sort of information.

Another student voiced concerns about whether or not faculty would be able to check in on students who are falling behind both academically and emotionally. Dr. Twyler Earl, who is the Associate Vice President for Student Success and happened to be in the audience, was able to speak to this issue further.

“Recently, working with the team of people at student life and the Live Last Center, we launched what’s called a progress report to all of your instructors,” said Dr. Earl. “We asked them to chime in on a lack of engagement in class, if you’re coming to class, if they’re concerned. We’re trying to find ways to engage and wrap support around you, and it really starts with using the right tools so that we can all communicate together.”

After the event, I had the opportunity to speak with a variety of students within the audience, including the people who had asked some of the questions to the panel. All of the students who volunteered responses said that they were happy with the Town Hall and that they felt heard, some even hoping that the event might become a more frequent occurrence throughout future semesters.

“I thought it went great,” said Dr. Earl. “We had an opportunity to come together as a community and really talk about those things that are on the hearts of students but also hear the hearts of administrators. I think when we have more opportunities like that to just dialogue and come around the table, that’s when magic happens. I’m really excited about it.”