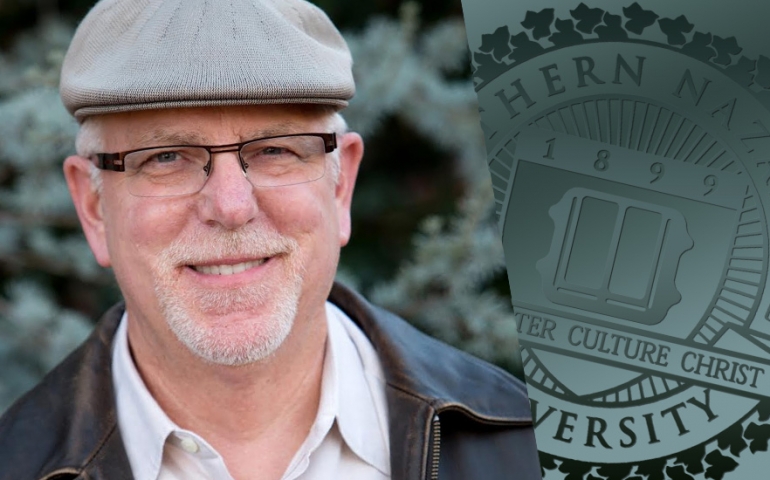 I just returned from the memorial service for my colleague, my mentor and my friend, Jim Wilcox.  After listening to so many eloquent words and so many funny stories, I’m hesitant to add my inadequate voice to the chorus that honored this one-of-a-kind man.  But in the back of my head I hear a familiar prodding from Jim himself saying, “You’re suppose to be a journalist.  Do your job.” So do my job I will.

Jim Wilcox joined the faculty of Bethany Nazarene College (SNU) in 1979.  This was the same year that I started my college career.  I never had Prof. Wilcox for a class, but he was my college pastor and I envied those who had him for Freshman English.  He was the young, cool professor that everyone wanted to be around.  And while in his final days at SNU he would not be accused of being young, he never failed to be the coolest guy on campus.

When I joined the faculty in 1991, I remember Jim coming up to me after my first faculty meeting and welcoming me to this wonderful SNU family.  I always would look for him at any faculty gathering with the hope of sitting with him and listening to his running commentary throughout the function.  However doing so was dangerous.  Containing audible laughter was nearly impossible and many stares from various speakers were directed my way when I could no longer hold back after one of Jim’s perfectly crafted and timed comments.

Four years ago, I began a new chapter of my professional life as a member of the Cultural and Communication Studies division at SNU.  This began a time when I got to see Jim daily as he would stop by my office on his way to retrieve a Frappucino from the fridge outside my office door.  He always had something good to say to me and I especially loved when he’d come inside and stay for a while.  He took great joy in the fact that there were now two Jims in the department and to distinguish himself on anything that might have both our names, he would brandish the moniker Jim the elder.  I relished being Jim the younger in his presence.

Shortly after joining the CCS division, I was asked to become the adviser for The Echo.  I was hesitant to do so mainly because I’d be assuming a role that was so wonderfully secured for 20 years by Prof. Wilcox.  The Echo was Jim’s baby and I knew I could never nurture it the way that Jim had.  But when my name came up, he encouraged me to do it and he never once questioned any decision I made.  He loved The Echo and he taught me to love it as well.

As memorial services often do, today’s led me to think about what made Jim so special.  It wasn’t hard coming up with the quality that so characterized this gentle soul.  Jim was courageously honest.  From the comments that he freely wrote on his students’ papers to those cutting remarks he’d whisper during faculty meetings, Jim didn’t hold back.  There was never any malice in his honesty.  He simply knew that in order for something or someone to improve, honest words were necessary.  You never had to guess where Jim stood on an issue.  If you didn’t know then it wasn’t an issue that anyone should be mindful of.  He also had this keen awareness that by being vulnerable and by not holding back his feelings, he was able to spark in others a courage to be vulnerable as well.  He made it safe for me to be me by Jim being Jim.

As I close this tribute my thoughts are of Jim pulling up this article as he sips on a Frappucino in the Starbucks in the sky.  I see him shaking his head and probably laughing out loud as he mentally edits each word.  I wish just one more time I could get one of his emails with notes about how to make it better.  I hope he knows just how much he made better.