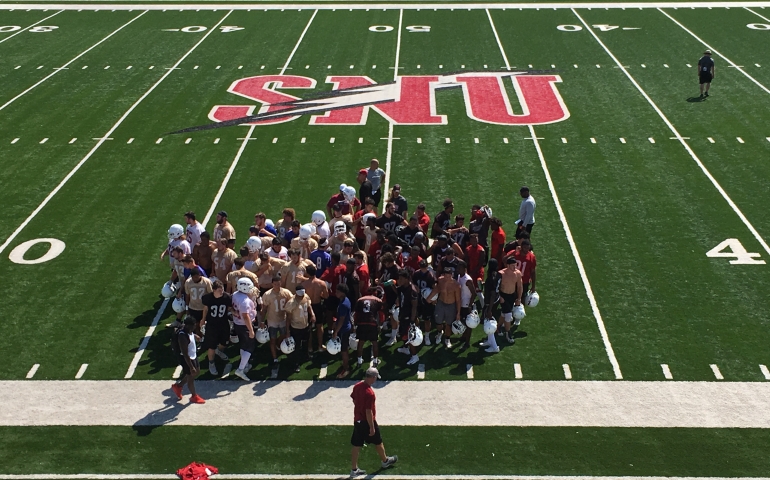 Years ago, Hank Williams Jr. sang the intro to professional football games asking the question, “Are you ready for some football?”After a long off-season, football is finally back in Bethany, Oklahoma! This coming Saturday at 6 p.m, the Crimson Storm will take the field for their first home opener.

Head Coach Andy Lambert and his staff return this season to lead 17 returning starters towards improving on their 4-7 record from a season ago. SNU was ranked 9th overall in the preseason Great American Conference (GAC) poll. When asked about that ranking and how he feels, Coach Lambert responded by saying, “You just have to play each game at a time.” Lambert went on to say, “Hopefully it doesn’t have any bearing on how we compete and prepare.”

Experience of this squad was highlighted as a strength going into this season. When asked to identify what stands out about this year’s team compared to the others, Lambert stated, “Experience is the number one thing that would be different from the last two years.” 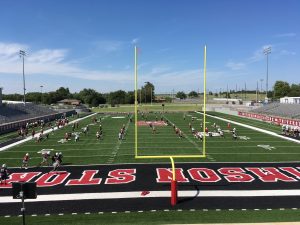 entering his second season with the team and has noticed a change from the previous year as well. Siehndel stated, “Growth and bonds of current teammates and new recruits have improved this groups’ teamwork, effort, and comradery.”

This coming Saturday, the Crimson Storm will collide with East Central University (ECU) Tigers. ECU will be looking for revenge after suffering a loss to SNU last season. In this matchup, both teams are looking for their first win of the season– not only is this the season opener for the Crimson Storm, the Tigers are coming off an overtime loss to Oklahoma Baptist in their last game.

The goal for the fans this coming Saturday is for maximum fan support. Not only is there a need for a home field advantage, but SNU is also hosting some recruiting visits this coming weekend. A loud and rowdy fan base not only will encourage the Crimson Storm, it could also entice potential recruits to come and play for the best fanbase in the GAC.

The extreme noise generated by fans can create havoc for visiting teams. Due to this extreme noise, they can have issues communicating incoming plays and audibles which can lead to mistakes and penalties. When asked how the home crowd can help at home games, Coach Lambert remarked, “Just show up and make noise.” He goes on to say, “Any support, any kind of attendance, we would be so grateful for that.” Teams feed off the energy and excitement generated by the crowd.

So, this coming Saturday, let’s pack the stadium. Students, faculty, and staff are needed to generate the type of environment that visiting teams will fear and recruits will love. After all the offseason workouts and practices, this team is ready to roll. Now it’s time for the entire SNU community to do our part and create the home field advantage that is the envy of the GAC. Let’s become part of the storm!

The Crimson Storm season is just beginning. For future information on all SNU games and schedules, visit https://snuathletics.com/index.aspx?path=football or the SNU Athletics app.