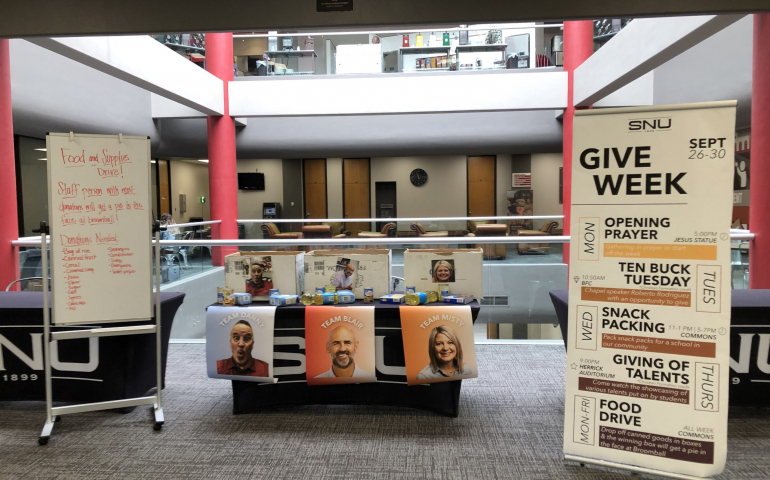 Today marks the halfway point of Give Week here at Southern Nazarene University. Only two days remain for students to dedicate their time, talent, and treasures, as per the challenge of the week-long event. While this week has presented many different opportunities for students to serve and to give to both SNU and our surrounding Bethany and greater OKC community, the ultimate goal for this week is centered around a food drive for the Tulakes Food Pantry.

The food drive donations are located in the lobby of Webster Commons. Each box is labeled with a picture of one of three faces: Misty Jaggers, Blair Spindle, and Danny Thomason. The food drive calls for non-perishable food items such as canned foods and soups, boxed cake mixes, spices, baking items, etc. Toiletries such as toothpaste, toothbrushes, soap, shampoos, and conditioners are also welcome donations. Whoever’s box has the most donations by the end of Give Week will be pied in the face at broomball this Friday.

Some were more excited than others at the prospect of being pied.

“I love it!” says SNU’s athletic director Danny Thomason. “We’re raising money for a great cause. I don’t mind at all.”

In fact, Thomason has quite a bit of experience taking pies to the face for charity.

“I got a pie in the face three weeks ago,” says Thomason. “I also got in the dunk-tank that day and talked a lot of trash to students trying to throw softballs and dunk me in the water. This was all to raise money for our cheer program, and this is even better if it’s for a food drive for folks struggling to make ends meet. The least I can do is take a pie to the face.”

Not everyone seemed as eager as Thomason is to face their potential fate this Friday. SNU’s campus pastor Dr. Blair Spindle, when asked about his role in Give Week, encouraged students to put their donations elsewhere.

“As far as pie contest goes,” says Spindle, “I would just say students should base their votes on, one, who’s the best looking? Obviously not me. Second, who’s the loudest? Again, obviously not me. It’s all for a good cause, but choose Misty or Danny!”

“That doesn’t surprise me,” retorted Thomason. “He’s running scared. He’s trying to deflect to other people, and if I have to step up and take a pie in the face then I’ll do it for the good cause.”

With all of the smack talk preceding Friday, it’s important that students make their final donations in order to secure their vote in time. Not only is it a way for students to participate in the fun to come, but in doing so they are also actively helping provide for our community.