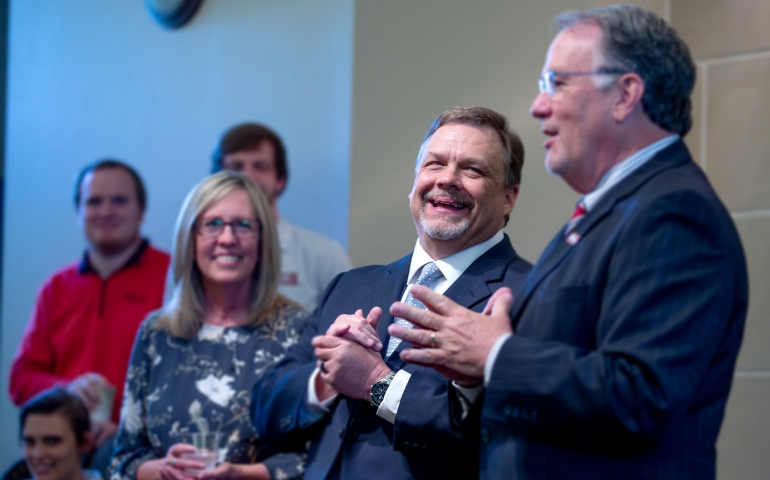 Originally from Virginia, Dr. Eades began attending a Nazarene church when he was in first or second grade. By the time he was looking to attend college, Dr. Eades discussed his struggle with attending a Christian school, saying, “I was having a tough time, and I was really struggling spiritually… I had done all the right things, but I really started losing myself as a high school junior and senior.”

But after hearing stories of successful Christian students attending Trevecca, Eades’s parents encouraged him to attend Trevecca Nazarene University for his first year. As he said, “I sort of went to a Christian college kicking and screaming.” Yet, this year transformed his life as he became heavily involved in the community at Trevecca that reignited his faith and began his passion for Christian higher education.

He served as a youth pastor for about ten years until he accepted a job at Mount Vernon Nazarene University in 2003, serving in 3 different positions: Director of Admissions and Student Recruitment, Executive Director of Enrollment Services and Marketing, and Associate Vice President for Adult and Graduate Studies.

It was at MVNU where he realized that his calling to ministry did not have to be exclusive to the bounds of a physical church: “I felt a calling to ministry and had served in youth ministry for about a decade, but I realized that when I stepped into Christian higher education, how much of a ministry it could be… SNU’s mission statement, ‘Making Christlike disciples through higher education’ absolutely fits my heartbeat for what school can be.” This is the heart of Eades’s passion, driving him to Trevecca Nazarene University in 2014 as the Associate Provost and Executive Vice President of Graduate and Continuing Studies and, eventually, to SNU in 2019.

It not only was SNU’s mission that brought Eades to SNU, but it was also “the ability to bring all of my work in both traditional and non-traditional, or adult population, together as a provost.” His work at Trevecca Nazarene University was particularly focused on graduate students, and he is excited to begin working with both undergraduate and graduate students at SNU.

The integration of higher education and faith is at the heart of Dr. Tim Eades, and he hopes to begin constructing a new future for SNU through building relationships and collaborating with faculty, staff and students alike.