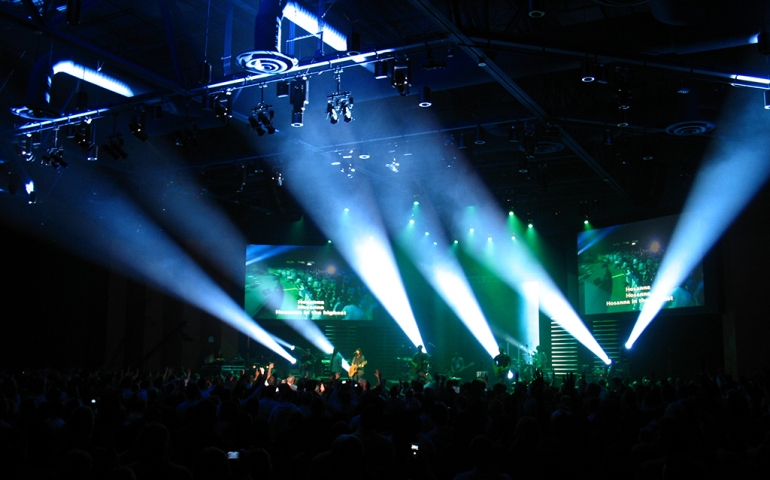 “My heart beating my soul breathing I found my life when I laid it down.” Do you recognize these lyrics?

The debut of Hillsong’s new movie, “Let Hope Rise” is now in theaters. The documentary, concert film provides the behind the scene experience of the popular worship band. It features the members’ lives outside of Hillsong, their serving relationships in other countries, and the background of the Hillsong church.

Hillsong United is a traveling worship band that originated from the Hillsong church in Sydney, Australia. The United team incorporates worship leaders, pastors, musicians and songwriters. Each member shares the same desires; to connect people everywhere with God. According to the church, their mission is to “write songs that awaken churches and individuals to the fact that we are redeemed and called into the story of God.” Through their music, Taya Smith, Joel Houston, Jad Gillies, JD, and Matt Crocker, have grown into one of the most successful Christian worship bands.

Watching the movie “Hillsong: Let hope Rise,” left me in awe. Not only is Hillsong’s music the first thing that appears in my Spotify, but the intensity they have for God is uplifting. To think an international band traveling the country, committed to give each person the same opportunity to worship, and hear the gospel, is God’s work.

Hillsong United is impacting the Christian community greatly. With the new movie catching media attention, the band’s response has made it clear that everything they do or accomplish is for the glory of God alone. The members of the band are not there to win one over with their musical gifts. They do not live glamorous lives and because of that, I believe they are great role models in the community. These leaders are changing the world and bringing an army with them. As they lay their faith out in the open, they reach an audience of every culture, religion, and race. Their lyrics have touched many souls by creating a sense of release and freedom that allows people to connect on a deeper level to their savior.

An act of true worship is being delivered nationwide. Global Churches, youth and non-believers are listening to their music and responding to it. The film is encouraging for all ages, people, and walks of life. I love that the movie was voiced as a documentary and provided worship. While watching, I was moved to actively participate, and that is something uncommon in Christian films. “Let Hope Rise” will make one feel a part of the Hillsong church and aware of the movement they are leading.

I was not alone in watching the opening night of the film. Kaylee Rawls, a freshman at SNU, said “‘Hillsong: Let Hope Rise’ shows me how ordinary people can come from totally different backgrounds, but still join together and praise the same God. More than anything, I want to have that kind of fire burning in my heart for the Lord, and after watching this movie, sharing the love of Jesus is more of a priority than ever.”

Libby Frees, a Junior at SNU says, “‘Let Hope Rise’ is as entertaining as it is encouraging. It’s a real story of God’s faithfulness, and a reminder that He does far more than we could ever ask or imagine. As a young worship leader, it helps to watch and learn from authentic worshippers on and off the stage.”
Hillsong is offering the world an invitation to join them in their journey of faith. The movie is open to every audience and age group.  Come with an open heart, listen to gospel and enjoy a great film.