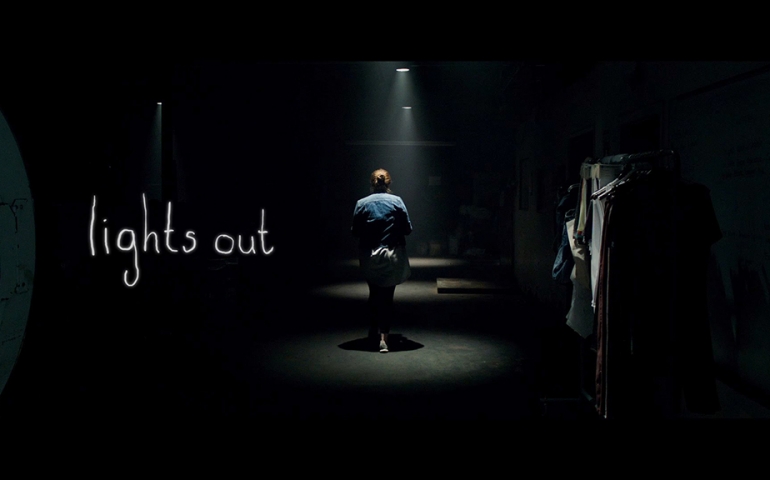 You know those movies where weird things start happening to kids and no one believes them. Then you’re just so upset about it and, before you know it, the whole family is dead? Lights Out, the upcoming horror movie, has an entirely different way of demonstrating this kind of plot.

Put yourself into the shoes of a child. Following the mysterious death of his father, young Martin has not been getting enough sleep . This is the same scenario that drove his older sister, Rebecca, to leave their mother, and lead her own life many years ago. When Rebecca begins to see parallels between her brother and her past.  she begins to investigate. What she finds out changes her view of her childhood and her mother forever.

Martin’s mother, Sophie, stays up every night talking to her childhood friend, Diana. The only problem is Diana has been dead for many years.

These late night conversations begin to interfere with Martin’s, Sophie’s son,  sleep schedule, and his social worker takes notice. Rebecca, Martin’s older sister, takes it upon herself to protect him and takes him away for the night.

Trouble ensues when Diana follows them to Rebecca’s house. Martin finally gets some much needed sleep, but Rebecca is awoken in the middle of the night to a scratching.

Rebecca is now forced to relive her childhood fears that until now she believed were all in here head. The next day, Martin’s social worker takes him back to his mother’s house, intending to provide a safer environment than his sister’s apartment. Rebecca, knowing the truth, takes up the task of learning as much as she can about Diana in an attempt to save her family.

Rebecca learns of her mother’s time in a mental hospital. During this time, she met a girl, about her age, with a skin disorder that makes her extremely susceptible to sunlight. Her name was Diana, and she died during an intense experiment that was meant to cure her.

However, Diana was not gone entirely as she still existed in Sophie’s head. When the kids and Rebecca’s boyfriend stay overnight in Sophie’s house, Diana attacks them with a vengeance. She knows they are there to take Sophie away from her.

They face the night armed with candles, light bulbs, and crank lights. When the sun goes down and everyone is asleep, Diana draws them out. Rebecca’s boyfriend is the first out of the house, but not before being thrown and clotheslined. Afterwards, Martin and Rebecca get locked in the basement, trapped with Diana.

At this point, Sophie has been knocked unconscious and the kids are left searching for another way out. They eventually encounter Diana in her physical form. Rebecca’s boyfriend returns with the police before things can get too bad. Unfortunately, the cops do not take the family’s advice and meet their demise soon after they arrive. Diana is now focused on the children, and Sophie is distraught. She now decides that the only way to end this is to end herself. No Sophie, no Diana.
This film does a wonderful job of building an emotional connection to the characters. You really care and stay interested in what happens next.  When Sophie commits suicide you will most likely feel conflicted. Truly a confusing but satisfying conclusion.