Authentic Peruvian cuisine is hard to find in the United States. I had heard mention a truly authentic Peruvian restaurant, so I decided that it would be first on my list of places to review this semester.

I came to the Inca Trail a little on the skeptical side, partly because I was raised in East Texas where anything labeled as Mexican, Chilean or Peruvian food was always just simple Tex-Mex. My expectations were not very high. However, I was soon proven to be very wrong.

Like my previous trips, I saw it necessary to bring a few friends in order to get an idea of several people’s opinion. Two of my suite mates, Mickey DeMarzo and Brandon Hart, as well as Jonathan Hane joined me for this trip. I invited Mickey in order to hear his opinions about the food since he was raised in Peru until the age of seven. I figured that if anybody would know if this was authentic or not, it would be him.

When we arrived, we were seated very quickly. The restaurant had a welcoming feel, and it was a nice change of atmosphere. One wall was decorated entirely with a panoramic view of Machu Picchu, while the other walls were decorated with pictures of different locations and people from Peru. There was a projector behind us that was showing a soccer game. It seemed a little odd that it was a projector rather than a TV, but it was not something that really bothered me during the visit, mostly because my inner music major was distracted by the Spanish music being played throughout the restaurant.

I barely had time to look at my menu before I heard Mickey say, “Oh, they have Papa la Huancaina!” Apparently this appetizer was something that he had not had since he was in Peru. We decided that this would make a good start to our meal, so Mickey was quick to order Papa la Huacaina for our appetizer. This food was definitely not Tex-Mex, and it was all new for me. Papa la Huancaina is a potato that is served with a creamy sauce and red peppers. We allowed Mickey to take the first bite, and he assured us that it was the real thing. The three of us then dove in after him, and we all thoroughly enjoyed the appetizer. Our waiter was surprised at how fast it was gone.

Our main courses came with chicken soup prior to the actual meal. The soup was good, but there was nothing really special about it. However, our main courses were absolutely wonderful, and they were not small dishes by any means. Mickey ordered the Lomo Saltado with beef, and Jonathan ordered the Churrasco Encebollado. Brandon ordered a seafood dish called Picante de Camarones. This dish included rice, mussels, shrimp and calamari. All of them said that their food was excellent, and I have no reason to doubt them.

I ordered the Adobo de Puerco, a pork chop dish served with green rice and beans. Cooked to perfection, the pork chop was tender and seasoned very well. It was served on a bed of green rice that was remarkable. The main thing that stuck out to me about this dish were the beans. I have had many different styles of Tex-Mex, all of which came with either refried or baked beans. My expectations for these beans were low, but they were amazing. By far, these were the best beans that I have ever had. The seasoning was spot-on, and they were cooked perfectly.

All of us cleaned our plates, which made our waiter smile again. We then paid for our meal on the way out. Pricing was decent, and I spent about what I had intended to. According to my own scale, I would give my experience at the Inca Trail an A-, and that is a hard scale to succeed on. If you want truly authentic Peruvian food, then the Inca Trail is your next stop. Located at 10948 North May Ave, it is a bit of a drive. However, I assure you that it is absolutely worth the trip. I encourage you try something new here in OKC, and the Inca Trail is the perfect place to go. 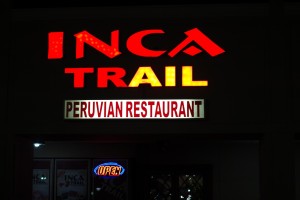