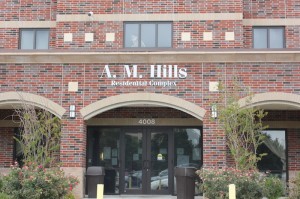 Though only a few years old, the A.M. Hills Residential Complex has already been plagued by vandalism.

Hills’ Resident Director, Tim Cole, spoke with The Echo in an interview about the latest vandalism in the dorms.

This type of defacing school property is not unheard of, but it is not so common in this new dormitory.

The vandalism started just before Christmas break featuring inappropriate drawings in white sharpie. The custodians were able to clean it up completely.

Since the stairs is where these “artists’” work were featured, the only place in the building that does not have security cameras, there are new security measures being taken. Cameras for each stairwell will most likely be installed to ensure this type of disrespect does not happen again.

“We mainly think that the reason these things have happed are because it’s getting close to break, the students are getting antsy and cooped up, therefore they tend to act out,” Cole said.

There are currently a few suspects. The resident staff is able to watch the video footage from around the designated area, narrowing it down to a couple of students. The measures taken to convince any guilty parties to confess are given via e-mails. Any students found guilty of this vandalism will be addressed and more than likely given a fine.