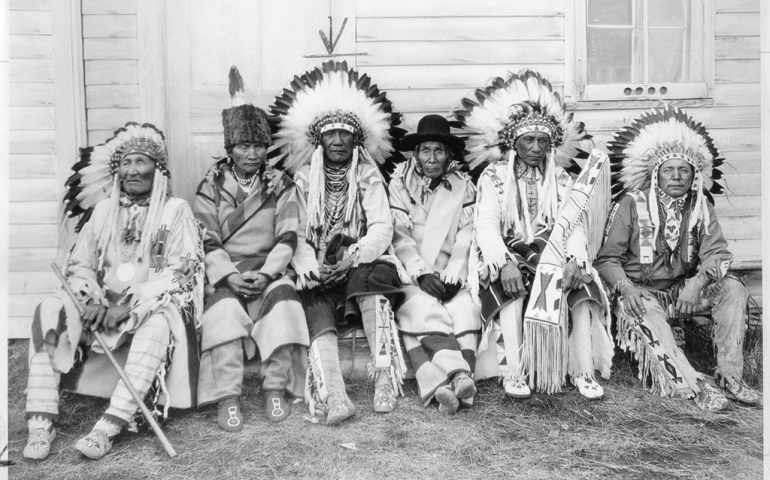 Before getting our minds centered on Christmas, we need to remember about November. November was declared as Native American Heritage Month by George H. W. Bush on August 3, 1990.  As Oklahomans, we are surrounded with Indian culture. Having this month dedicated to the Native American’s was an outlet for them to share their culture, crafts, music, dancing, and traditions.

Recognizing this month can provide native education and celebration about Indian culture. We have thirty-four federally recognized tribes within our state. Our state’s name, Oklahoma, was created from Choctaw language: “oklah homma,” meaning red people. Native Americans uphold values such as loyalty, honesty, and female-prominence.

According to Professor Bolerjack, “One of the first things Columbus did after he arrived in 1492 was begin making plans to enslave the natives.” Many times, the natives had been looked down upon by European settlers even through their times of remaining neutral. Although the government has made grants and lands available for the Natives, some are still having to fight back for their rights.

At this moment, the Sioux tribe is protesting the Dakota Access Pipeline at Standing rock. They are terrified about the Missouri river, their main water source, becoming polluted. SNU’s Multicultural Student Organization is putting on an event to recognize the natives and their contributions.

You can follow them on Instagram at MSO_SNU. As stated on their Instagram, “as the multicultural student organization, we stand in solidarity with the Sioux tribe in South Dakota because we recognize the history of their oppression and that #waterislife.”

I asked a fellow SNU student if they could name any Native American events or museums. The student answered that she knew about places but could name them.

If you are looking forward to local events enriched with Native culture, then Oklahoma City may be your best bet. In downtown Oklahoma City, the Red Earth Art Center will be putting on an event called Treefest. This opened on November 1st, 2016 and will run until January 13, 2017. There are over 15 decorated Christmas trees with ornaments handmade by Native Americans. This will be held at the Red Earth Art Center free of charge.

With a little further of a drive, you can experience some of the other Native museums available. The Gilcrease Museum in Tulsa, Spiro Mounds Archaeological Center in Spiro, Cherokee Heritage Center in Tahlequah, Chickasaw Cultural Center in Sulphur, Five Civilized Tribes Museum in Muskogee, and the Standing Bear Park Museum and Education Center in Ponca City are available museums and parks to learn more about Native American Heritage.

[author image=””] Miranda Cagle, Guest Writer
Miranda Cagle is new to SNU as a transfer student. She plans to begin the nursing program in January 2017. She loves to volunteer within the community and serve at her church in Moore, OK. [/author]