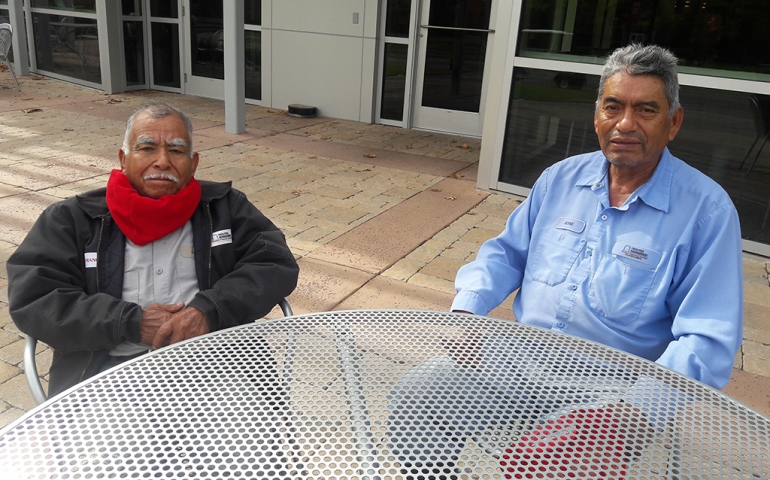 The landscapers here at SNU work tirelessly everyday to make sure our campus gardens look great. I sat down with them hoping to get to know them a little bit more.

There is only two individuals that are responsible for the entire campus, but they do it with such care and passion it almost seems as if the campus has hundreds of landscapers working.

Mr. Francisco is the shorter gentleman of the two and has been working here for about 10 years. He can usually be seen driving the small golf cart filled with flowers around campus. He mentioned that his prior job was tending to horses. “I used to work in a small ranch near here,” he said, “I worked some time in that job. It was about 8 years.”

This led me to question about their current occupations here at SNU. Mr. Jose, the taller gentleman who has worked here for 11 years, described how extremely grateful they are for their current jobs. “They are not bad people to work with,” he continued, “they are not demanding us to ‘do this,’ ‘do that’ or ‘hurry up.’”

Although, he does mention a pay raise would be nice, he understands that times are hard and that as an older man finding a job can be extremely difficult. He is thankful for this job that supports him and that SNU is patient with the him and Mr. Francisco.

However, they do miss the occasional letter they would receive in the mail. “Six or seven years ago, there was a different system. Every once in awhile they would send a letter to the offices telling us the gardens look beautiful,” explained Mr. Jose.

Mr. Francisco explained further that, “They would tell us the gardens look very beautiful and that everything was very clean.” They both very much enjoyed getting that occasional letter in the mail. Mr. Jose thinks that it could be possible that they send it through email now, but he misses the, “satisfaction of having that postal letter that explains it.”

When it comes to the students, both men have such deep affection for the students. They believe that if it weren’t for the students they wouldn’t have a job. “We see the students as something like our bosses. The place where they sleep and everything they do to give to the school. That is where that money comes from and that is where we get paid from,” says Mr. Francisco, “This is why we look at the students with love and care.”

Mr. Jose says, “I look at them with love because they are our future.” Both men look at the students as the next leaders of our nation. Mr. Jose continues to say, “If  we have good students then good. We can have a better future.”

Although, they do ask that everyone be a bit more careful when walking or driving through the gardens. However, they do understand everyone has moments. They claim to be guilty themselves, where they don’t pay attention or are in a hurry, so they don’t get angry or upset but just ask to be more careful.

When they are not working hard at SNU, both enjoy spending time with their families or tending to their own gardens at home. Mr. Jose said he enjoys the time he spends with his wife. They make it an effort to do things together on the weekends. Mr. Francisco enjoys the time he spends with his daughters. They took a small vacation to California not too long ago and says the city reminded him of his childhood.

Unfortunately, our chat came to a close. Both of these men have incredible souls, so be sure to thank them for their hard work around the campus. It looks absolutely beautiful because of them.