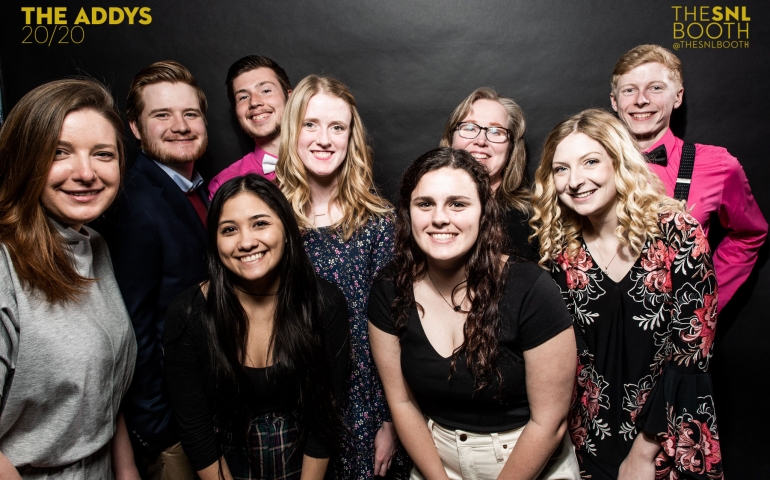 On Saturday, February 8, 2020, Southern Nazarene University (SNU) design students attended the 2020 OKC Addy Awards. It was held in Oklahoma City, OK, at the Bricktown Events Center. The OKC Ad Club is in the American Advertising Federation’s (AAF) 10th district, and this competition is the first of a round of three tiers in the national competition.

The American Advertising Awards (Addy’s) receives over 40,000 entries nationally every year, and students within the 15 different local districts compete to win locally, in the district and nationally. This year, SNU student Sarah Ottaberry won a Bronze Addy for her publication design, titled “HomeGrown Goodness.”

Planning on attending SNU as a music major, those plans changed when she saw the cardboard chair project on display in the library on a tour her senior year of high school, saying, “I was so inspired that someone could creatively think and execute a project like that. Ever since that day, I knew that the graphic design department here at SNU would be a great place to learn and grow into a career I would be passionate about.”

While Ottaberry has found great success within the world of graphic design, she shared that she has not always felt as if graphic design is what she’s supposed to do: “If I’m entirely honest, for a while, I wondered if I had picked the wrong major. I’ve felt discouraged in my works and creations. A few months ago, I asked God for clarification and restored vision of what He had planned for me. I entered a magazine design I had completed for a class into the American Advertising Awards, which is the largest creative competition in the world, not expecting much out of it.”

Ottaberry went into the competition questioning her major, but she came out of the awards with more clarification and confidence as a designer. “I didn’t tell many people that I had won an ADDY because I was still trying to figure out what God was trying to say to me. But here I am, receiving an award for something that I had created with my God-given talents. Before I even knew that God had gone to win my battle, He came back and called it my victory. Today I tell you that God turns struggles into testimonies, worries into praises, and doubt into confidence,” Ottaberry said.

The graphic design department has been a place for Ottaberry to learn more about both the field of graphic design and herself: “Since being in the graphic design program, I have come out of my shell quite a bit. I am no longer the shy introverted girl I use to be, I have more confidence, and I have the drive to be authentically me.”

Professor Phyllis Eagle of the graphic design department also noted Ottaberry’s success and growth, saying, “Sarah has always been a dedicated student and puts great effort into every project. She has grown in her design skills through her desire to improve and pushed herself to explore new techniques. Winning an Addy award is a great accomplishment, but Sarah’s bigger prize was the experience she gained. She created a beautiful 50-page magazine she concepted inspired by her grandparent’s garden, wrote all copy and photographed 99% of the images. An Addy award is an introduction for designers into their career field announcing their high level of expertise and clever design. Of course, I am thrilled for her and very proud of the recognition it gives her.”

As a junior at SNU, Ottaberry is still figuring out what she is going to do with her degree in graphic design after she graduates. While she may not know what the future holds, she is certain of one thing: “I feel as if my mission is to serve others through visual arts… becoming a servant to others through my career is essential. No matter where God places me, I will strive to serve.”