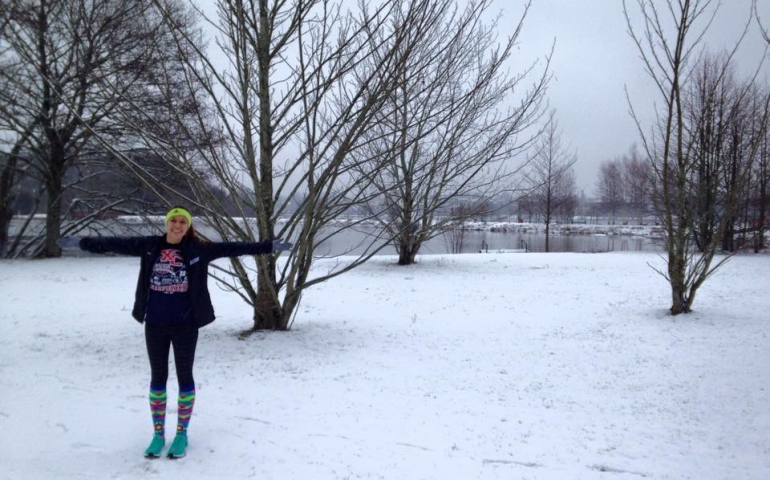 Sweden? Yeah, sure, let’s go there! The decision to study abroad has already been such an adventure, even if I’ve only been in “Europe’s greenest city,” Växjö, for three weeks.

It took an early morning car ride, three long flights (stinky footed passengers included), and a train ride without any English to get here, but since then, classes have started as well as many adventures.

Classes here run across four periods, or 5 week blocks. This means that you most likely have one class in the first period, one in the second and so on. I’m currently studying “Focus on Scandinavian and Swedish Film.” The class only meets once a week, 10 am to 12 pm and 1 pm to 4 pm. It has been so weird to have this much free time!

When we arrived, we were given a Swedish buddy and a Swedish family. This has been a great opportunity for me to get to meet some of the locals, as well as get to ask silly questions, like what kind of cheese should I buy?! (It’s not normal. They don’t even have the bagged shredded cheese!) My student buddy, Antonia, is such a sweet girl, and I am enjoying getting to know her more. Jonathon Orwig, Sophomore Computer Science major, and I share a Swedish family. They are great, too, and we can’t wait to get to spend more time with them!

They have the best tradition here; it’s called fika. Fika is when you stop what you’re doing to go meet a friend. You would typically order coffee and a pastry like kannebule (kind of like a cinnamon roll) or kladdkaka (almost like a molten chocolate brownie). I have definitely become a big fan of fika!

Despite their love of yummy baked goods, the people in Växjö are so fit! Almost everybody bikes to work or school. Jonathon and I bought bikes on our third day here. The bus is great, but those fares rack up quite quickly and getting to ride alongside a beautiful, frozen lake to campus each day has provided a stunning sight. One bad thing about biking is the weather. It either snows, rains or sleets every day here. It’s not too fun to ride a bike through the sleet in freezing temperatures on your three mile commute to campus.

Not everything has been a breeze, though. Simple things like shopping at the grocery store are such large tasks! All of the labels are in Swedish, so you could say we do a lot of guessing. After accidentally buying filmjölk, a type of sour yogurt that is not good on Cheerios instead of regular milk, we have been using the translate app on our phones more often.

Another difference here is their views on religion. The Scandinavian countries are very secular, and we have found that you won’t see five churches down one street here. Instead, it is challenging to find a church, much less one that has a sermon in English. We’ve been getting to do our own little church services so far, though, and it has been a lot of fun.

Saying yes to the idea of studying abroad has been such a wonderful experience so far, and I can’t wait for all of the adventures ahead of us!

Keep up with Laura’s adventures in her blog.