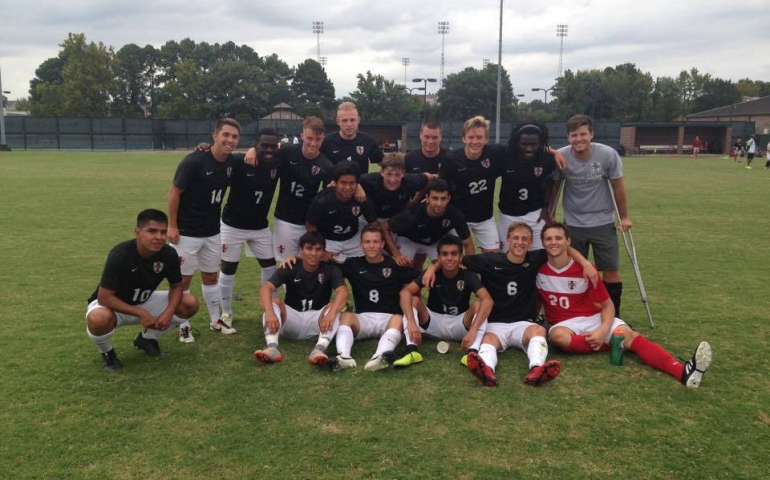 The Crimson Storm Men’s Soccer Team are a month into offseason workouts and have hit the ball rolling. In mid-January, the men’s soccer team started off the semester with futsal. Futsal is a modified form of soccer played with five players per side on a smaller court that is generally inside. It’s a high intensity, fast-paced game that requires quick thinking, but does not necessarily require high exertion. It allows the players to get maximum amount of touches on the ball in a fast-paced environment.

I talked to the Great American Conference Freshman Player of the Year and All-GAC First Team midfielder, Tommy Fiszel about what it has been like since the end of last season.

“Since the last game of the season we had a tough ending, and it definitely was not the way we wanted to go out. I feel like we all had a bad taste in our mouth, and we didn’t really take much of a break from soccer,” Fiszel said. “So, after our season ended, we would play futsal in the gym everyday. Once we got back from New Year’s Break, we started workouts and futsal, and because of NCAA rules we complete only 8 hours a week.”

I also asked Fiszel about some of the goals he has for himself and the team for this offseason.

“In the offseason we have some goals we look to accomplish. We want to improve as a team and compete every chance we get. We also want to build our chemistry as a team, because a big part of that is what we were missing during the season,” he said. “The off-season also gives a chance for players individually to build a new reputation for themselves and work to be the best on the team. The players who maybe didn’t get as much playing time have their shot to improve before the next season.”

Next, I caught up with Head Coach George Schroeder and asked him about some of the things he looks forward to most about soccer’s offseason.

“Family time and movies. Holiday season is one of my favorite times of the year. With the college season just wrapping up, it’s nice to have that time to relax and be with family,” said Schroeder. “Part of my work is coaching youth soccer also. So, my days are long during December and January, and I get a nice break from all of it to recharge. I love everything about the Christmas season, so it works out nicely.”

He then went on to explain what the recruiting process is like year round.

“Recruiting is basically the same year round,” Schroeder commented. “During season I am not able to put a lot of time into it, but that is the time of the year our local high school players can tryout. So, there really is not much of a down time for recruiting.”

I then asked Finally, I inquired about some of the things Coach Schroder enjoys doing that he doesn’t necessarily get to do during the soccer season.

“I used to really like to go camping during fall break. That is not possible now during college season, so I will try to camp some during the summer,” he said. “I also try to find a few weekends to go fishing and slow down just a little. I get bored pretty fast sitting around, so it doesn’t take long before I am rejuvenated and back at it. I also really enjoy going to the movies. It’s a chance to escape and relax for a couple hours.”

The men’s soccer team looks to reload this offseason and to have a big season this next fall. With veteran leadership returning, a strong group of promising underclassmen and a solid recruiting class coming in, expectations will be high for the Crimson Storm.

The spring schedule has yet to be announced, but be on the lookout to catch the men’s soccer team in action towards the end of the semester.